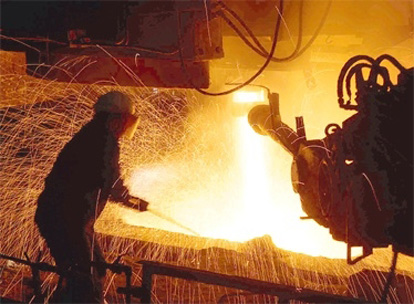 Shimla: Withdrawal of industrial package for Himachal and industrial slowdown having deeply impacted setting up of new units in the state as the high power single window on Friday cleared just one new project and permitted expansion of five others.

One new project and five industrial expansion projects were approved that entail fresh investments worth Rs 88.91 Cr and are expected to create an employment potential for 338 people, said a government spokesman.

Among the expansion projects approved were those of Winsome Textiles and that of Nanotechnology. Revival plan of a defunct unit Him Ispat rechristened as Bindal Steels in Kangra district was also approved by the state level single window clearance and monitoring authority that was chaired by chief minister Prem Kumar Dhumal.

The new project approved was a cold storage project to be set u in Theog region of Shimla district, said a spokesman of the industry department.

The ten year industrial package, which provided incentives to new industries being set up in the hill state with a excise and income tax holiday along with subsidy on capital investment, was cut short by the union government and ended in March 2010, three years before it was due to expire.

With the tax incentives withdrawn, industry has been reluctant to set up new  units in the state.