Dharamsala: The Dalai Lama has always discouraged self-immolation but such protests are continuing in Tibetan due to China’s hardline policies, Prime Minister-in-exile Lobsang Sangay said Saturday.

He called on the United Nations to appoint a special rapporteur for Tibet as the situation there was volatile amid a Chinese crackdown on dissidents.

“The Dalai Lama and the Central Tibetan Administration (CTA) have always discouraged such drastic actions. However, despite our pleas, Tibetans continue to self-immolate with 14 cases already in 2012,” Sangay said on the 53rd anniversary of the Tibetan National Uprising Day.

He blamed the Chinese authorities for the growing number of monks and nuns setting themselves afire.

“The fault lies squarely with the hardline leaders in Beijing, so does the solution. The self-immolations are an emphatic rejection of the empty promises of the so-called ‘socialist paradise’,” he said, while addressing thousands of exiles at the hilltop temple at McLeodganj in the presence of the Tibetan spiritual leader.

He said the Tibetan struggle was not against the Chinese people or China as a nation.

“It is against the government’s policies. China must acknowledge the depth of the problems in Tibet and understand they cannot be solved through violence.

“Tibet has been under undeclared martial law, and Tibetans, including monks and nuns, were forced to denounce the Dalai Lama and attend patriotic re-education classes. Foreigners and international media are barred from Tibetan areas,” Sangay said.

Sangay called on Beijing to accept the ‘middle-way policy’ that demands greater autonomy for Tibet within the Chinese constitution and to resume the dialogue between the Dalai Lama’s envoys and the Chinese.

“Dialogue and a peaceful resolution to the Tibet issue are in the best interest of China, the Chinese people and Tibetans,” he said.

“Hong Kong and Macao have been granted high degree of autonomy. Despite resistance from Taiwan, China has offered Taiwan more autonomy. Why are Tibetans still not granted genuine autonomy?” 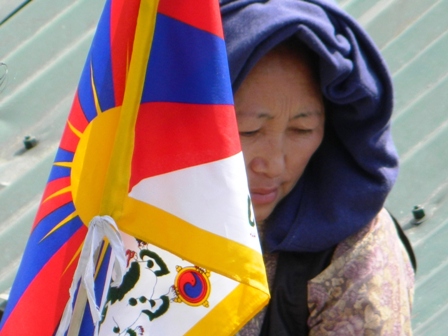 Offering tributes to those who have sacrificed their lives, he said: “If the Chinese government’s claim that Tibetans enjoy freedom and equality are true, then it should allow democratic, transparent, free and fair elections in Tibet.”

Every year, Tibetan exiles worldwide remember March 10 — the day when the Chinese launched a crackdown to suppress an uprising in Tibet.

Some 140,000 Tibetans now live in exile, over 100,000 of them in different parts of India. Over six million Tibetans live in Tibet.