New Delhi : The subcontinent can become a paradise in the region by retaining cultural, social and political identities of countries like India, Pakistan and Bangladesh, says former Pakistani Army officer, journalist, writer and commentator Abdul Rahman Siddiqi, an old “Dilliwallah” from Ballimaran in Chandni Chowk.

“I advise: don’t touch Pakistan, Bangladesh and India. There can be a subcontinental union, but absolutely no reunion. The people of Pakistan have a deep love for India, but they love their Pakistan more…India can be a master of the subcontinent but not in the way you (India) want,” Brigadier (retd) A.R. Siddiqi said here in an interview.

“After all, we are all very poor countries. And we are not apes, but humans in essence. But we have sold our freedom to the US,” said 88-year-old Siddiqi, who retired in 1973 as the head of Inter-Services Public Relations.

Recalling India’s reaction to the US post-9/11, Siddiqi said: “Jaswant Singh, the then defence minister, offered everything to the US, including naval bases, even before (then joint chiefs of staff committee) General Colin Powell and the US president telephoned India for help.”

“But they called (then Pakistani army chief and president Pervez) Musharraf, after which he pledged support,” Siddiqi said, pointing out the difference.

The writer, who is in India to launch his book, “Smoke Without Fire”, a memoir of his pre-partition days in Chandni Chowk published by the capital-based Aakar Books, left India in 1947 for Pakistan to work as a journalist.

“I flew out to Lahore from Safdarjung airport in March 1947 in a chartered plane. It cost me Rs.98 (about $2 at current rates),” Siddiqi recalled. He then shifted to Peshawar before opting for the army.

An alumnus of St Stephen’s College, Siddiqi is the author of “East Pakistan: Endgame: An Onlooker’s Journal (1969-1971)”.

Siddiqui said he was in the then East Pakistan (now Bangladesh) in 1965 with his “best friend General Osmani (known as Bangabir General MAG Osmani). Osmani, who had retired from the Pakistani Army in 1967 trained the Mukti Bahini and commanded it during the 1971 liberation war.

Commenting on the communal harmony inherent in Indian society, the writer said: “The culture is still Ganga-Jamuna tehzeeb (the co-existence of Hindu and Muslim cultures of northern India).”

“There will be no improvement in relations between India and Paksitan till India tries to stop saying that Pakistan is responsible … (for terror),” he said.

Siddiqi said Delhi has not changed much over the years because the people still relieve themselves under the sky. “My home is still there. I became emotional when I visited it, but I knew I couldn’t stay there for more than a night. But there is no nostalgia left,” he said.

Siddiqi said “his home in Ballimaran had one lavatory – without a flush – for the entire family”.

“There were two mugs – one of which was to wash oneself. During the rainy season, we – the Siddiqi brood – ate a lot of spicy food like keema parantha and suffered from dysentry. My mother, a stickler for cleanliness, said why do you have to go to the toilet every day… I was perennially constipated,” Siddiqqi laughed. “I still remember the day when the first flush toilet came to our neighbourhood. I gave a speech. I was barely 8-9 years old,” Siddiqi said. 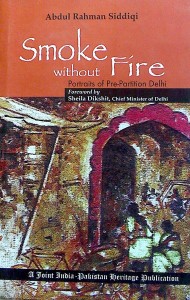 The Siddiqi clan of Punjabi Saudagar Muslims from Multan and Punjab, was the most affluent in old Delhi and lived in Haveli Hissamuddin Haider – a Punjabi traders’ citadel, the writer said.

Old Delhi has left an indelible mark in Siddiqi’s early education. “I was getting proper education but I had to join the Oriental College at Fetehpuri Mosque (after his grandfather objected to his regular education), where I studied Persian, Arabic and Urdu. I was in the company of Pathan students and joined an akhada (wrestling club) for one and a half years,” he recalled.

The publication and the launch of Siddiqi’s book in India, an initiative of the Policy and Planning Group, is an attempt to bridge the divide between India and Pakistan, said Diljeet Titus, the Group’s secretary.
IANS