Shimla : Nathpa Jhakri , the country’s largest hydro electric project , has raised its energy generation target to 7000 million units (MU) and a revenue target of Rs 1557 crore in the next fiscal .

The 1500 MW Nathpa project is located on the Sutlej river in Himachal Pradesh’s tribal Kinnaur district . Last year it generated 7,551 MU against a target of 6,900 MU official said . 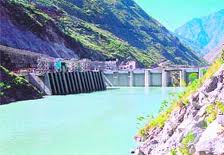 The project came into operation in 2004 and is built and run by the Sutlej Jal Vidyut Nigam Limited (SJVNL) a PSU based in Shimla .

The Nathpa project is likely to achieve a target of 7600 MU in the current fiscal ending this month .

For its meritorious performance in the last fiscal the power station was awarded the prestigious ‘golden shield’ by the ministry of power .The award was announced last week .

The MOU includes targets of construction of 412 MW Rampur hydroelectric project by 2013 . It is coming up on the Sutlej river in Shimla district .

The PSU is also constructing the 775 MW Luhri project and 66 MW Dhaulasidh projects in the state .

It is also building projects in Uttarakhand, Nepal and Bhutan .

SJVNL is a joint venture between the central and the Himachal Pradesh governments. The former holds 74.5 percent stake, while the remaining 25.5 percent is held by the state government.

In 2010 the central government sold its 10 percent equity.

The company in January announced a 20 percent increase in its profit for the third quarter of this fiscal ending December.