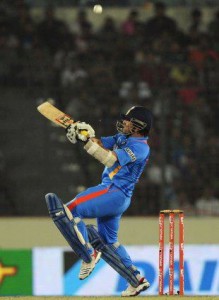 Mirpur (Dhaka) : Virat Kohli led the charge with a magnificent hundred in India’s record chase of 330 runs to beat arch-rivals Pakistan by six wickets in the fifth ODI of the Asia Cup at the Shere Bangla National Stadium here Sunday.

Kohli struck a career best 183, also the highest by an Indian against Pakistan, as the World Champions achieved the target of 330 with 2.1 overs to spare. Rohit Sharma (68) and Sachin Tendulkar (52) came up with valuable knocks as India chase down its highest target in ODIs on a perfect batting strip.

India bettered its 2002 Natwest final performance when they had chased down a target of 326. But for the second time in three weeks India were left at the mercy of Sri Lanka to determine their place in the final. A win for Sri Lanka in Tuesday’s last group stage match against Bangladesh will ensure a India-Pakistan final.

Last month India were also left at the mercy of Sri Lanka, who denied them a place in the finals of the Commonwealth Bank tri-series in Australia.

The 23-year-old Kohli, however, on his part led the team to another 300 plus run chase within a span of three weeks. The Delhi boy hit an unbeaten 133 as India had achieved a target of 321 making a mockery of Sri Lankan bowlers in 36.4 overs, February 28, in Hobart during the tri-series in Australia.

Against the arch-rivals here Sunday, Kohli, who struck his second century of the tournament and 11th of his ODI career, was in his elements and was duly adjudged as the Man of the Match.

Chasing a mammoth target, India made the worst possible start losing opening batsman Gautam Gambhir without any run on board in the second ball of the innings, trapped lbw by offie Mohammed Hafeez.

Kohli and Tendulkar then brought back the Indian innings on track with their 133-run stand for the second wicket. They scored briskly and always kept India ahead of the asking run rate.

Tendulkar’s 48-ball knock was studded with five fours and a six and by the time he departed in the 20th over India were much ahead in the required run rate run rate. He fell to a brilliant delivery from Saeed Ajmal (1-49) and was caught at first slip by Younis Khan

However, there was no stopping Kohli on the other end. The India vice-captain got his 50 in style cutting Ajmal for a four through point in 52 balls. Kohli got his 11th ODI hundred in 97 balls.

Kohli and Rohit ripped apart the Pakistani bowling with their 172-run stand for the third wicket that took India to the threshold of a magical win. Rohit struck five fours and a six in his 83-ball stay and by the time he departed in the 46th over India needed 25 runs off 25 balls. Rohit departed in his attempt to hit out Umar Gul (2-65) and holed out to Shahid Afridi at mid-wicket.

Gul picked up Kohli in his next over leaving India at 318 for four in 47.1 overs. Suresh Raina (12 not out) and skipper Mahendra Singh Dhoni (4 not out) took India home safely.

Earlier, a double century stand between openers Mohammad Hafeez and Nasir Jamshed propelled Pakistan to a massive 329 for six in 50 overs.

Hafeez (105) and Jamshed (112) gave Pakistan a great start with their 224-run stand after skipper Misbah-ul-Haq opted to bat first on a track that offered little assistance to the Indian bowlers.

Dhoni used eight bowlers with little success. Pacers Praveen Kumar and Ashok Dinda got two wickets each but were expensive.

Hafeez and Jamshed were aggressive from the outset. They found the gaps easily and scored at will. Hafeez smashed nine fours and a six in his 113-ball knock while left-handed Jamshed hit 10 fours and a six during his 104-ball stay.

Hafeez was the first to reach his century, third of his career and soon his opening partner also reached his maiden ODI hundred.

The batting Powerplay once again proved to be the game changer. Jamshed in his zeal to score faster was caught at short-third man by Irfan Pathan off off-spinner Ravichandran Ashwin.

Hafeez fell in the very next over, trapped plumb in front of the wicket by Dinda. The final Powerplay yielded 38 runs for Pakistan at the loss of two wickets.

The Indian bowling looked spineless. Tendulkar dropped Jamshed off his own bowling but Raina took incredible one handed catch to send Younis back, while Kohli took a good catch on the boundary to dismiss Hammad Azam.
IANS