New Delhi : The Ganga, deified by Hindus and intrinsic to its literature and lore while providing water to over 40 percent of India’s population in 11 states, has become a victim of poor management, bad policy and lack of will by the government to save the river in the last 25 years, say experts.

The government’s apathy can be seen from the fact that the National Ganga River Basin Authority (NGRBA) – a body constituted under the chairmanship of Prime Minister Manmohan Singh for cleaning the Ganga — has met only twice since its inception in 2009. 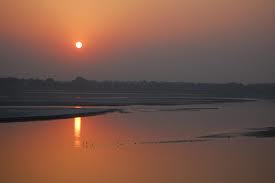 This despite the fact that all the seven members of the authority, having an annual budget of Rs.500 crore (100 milllion USD), unanimously wrote to the prime minister in November 2011 for holding a meeting and for allocation of responsibilities to them.

The meeting was called in February this year but was postponed due to assembly elections and since then there has been no communique from the government.

“The government has neither political will nor any executable plan. During the three and a half years of the NGRBA that was formed to restore the ancient place of pride and respect to the Ganga, it met only twice. Even the allocation of members’ responsibility was not done, reflecting a non-serious attitude,” Singh said .

Echoing similar views, R.H. Siddiqui, former Aligarh Muslim University professor and NGRBA member who resigned, said the prime minister’s declaration of Ganga as National River is nothing but an exercise in tokenism.

“The officials seek suggestions from us but pay no heed to us. If they had to continue with their own ways towards exploiting and polluting the river, what was the need to form the NGRBA? It has become a joke,” he said.

This also led former Indian Institute of Technology (IIT) professor and environmentalist G.D. Agarwal, 80, to sit on a fast-unto-death in January this year. He called off his fast Friday after a government assurance to call an NGRBA meeting on April 17.

“The union government understands the importance of the Ganga and will explore all measures to ensure the uninterrupted flow, purity and sanctity of the Ganga,” Union Coal Minister Sriprakash Jaiswal said in a letter to Agarwal.

Last June, Swami Nigamanand gave up his life while fasting for over 75 days in Haridwar against rising pollution in the holy Ganga.

Activists worry if the NGRBA will meet the same fate as the ambitious Ganga Action Plan (GAP) undertaken in 1985 by then prime minister Rajiv Gandhi.

The GAP was created to clean the Ganga but crores of rupees spent on it went into the drain due to poor planning and mismanagement of funds by various agencies.

“The need for revamping the river conservation programme was widely recognised in view of the shortcomings in the approach followed in the GAP. It was felt necessary that a new holistic approach based on river basin as the unit of planning and institutional redesign may be adopted,” said a senior environment minister official.

The ministry in July 2010 signed a memorandum with a consortium of seven IITs for the development of the Ganga River Basin Management Plan (GRBMP), which was to be completed within 18 months.

“The IITs have submitted five out of the 17 reports to us and have asked for an extension till 2013. Any future course of action will be decided in the meeting scheduled next month,” the official added.

Here are some facts on the river Ganga