New Delhi : Fans of Sachin Tendulkar all around the country were euphoric in their celebrations as the maestro completed his much awaited 100th international century against Bangladesh at the Shere Bangla National Stadium, Mirpur, Dhaka Friday.

While Delhi celebrated in its traditional style with the beats of bhangra, Tendulkar’s home twon Mumbai erupted in joy by bursting fire-crackers to pay a rich tribute to the batting maestro. 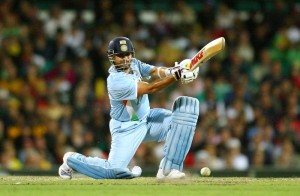 “We were all anxious that he was taking so long, but as soon as he reached the landmark we all started jumping, clapping and shouting. I am very relieved, one tension is gone now I can work peacefully. I hope he never retires,” said Chetan Arora, a shop owner in Delhi.

Rajinder Sharma, an ardent cricket fan in Delhi, though was a little disappointed that the Indian maestro reached the milestone against a lower ranked team like Bangladesh.

“It is an unbelievable feat, it was long time coming. But I would have liked him to score the hundred against a better team in a Test match. The best thing would have been to score it in Australia. Nevertheless I am happy, he’s a great player,” said Sharma.

“I feel like celebrating, he should get all the national awards. The record is untouchable and unattainable. He has made the country proud, now I only wish he scores 20,000 runs in ODIs, said Piyush Tanwar, a student.

Mumbaikars took to the streets to burst crackers and cheer after master blaster scored his elusive 100th international ton Friday in an Asia Cup match against Bangladesh.

The city’s youth spent thousand of rupees on buying crackers that they burst soon after the batting maestro reached the magic figure in 138 balls, hitting 10 fours and a six.

“Sachin is an iconic player – and this event was long overdue. He is a great player, and this milestone just serves to prove it again. The question now is what next – like the famous quote from Star Wars… he is now headed where no cricket player has ever been,” said Abhinava S.N, an e-learning professional.

“Bashing Sachin makes losers feel like achievers. When a man runs 100 miles, he may run 100th the slowest but that doesn’t mean his 99 miles were crap. Meanwhile, the God carries on,” said Raghavendra.K, a sports enthusiast.

Youngsters burst crackers and distributed sweets in several parts of the Agra as Tendulkar punctured the psychological barrier of the 100th century.

“We waited anxiously and kept praying for Sachin. He has made us wait for quite a long while. The moment of history brought tears of joy,” said a school teacher, Anubhav.

Homemaker Padmini, glued to her TV, refused to answer phone calls or open the door for the courier service man till the 100th run was scored.

“I am so superstitious, I did not get up fearing this might bring bad luck… What a relief!!”

On the streets, people danced in joy and celebrated Sachin’s tryst with destiny.

“It was a kind of catharsis, long overdue,” said Geetam, a student along with her friends Narendra Varun and Pavan.

Vishal, a photographer, said: “For us Indians it is a proud moment. The whole country rejoices in the unparalleled feat of Sachin, the little master, a great inspiration.”
IANS