Ganguly called Dravid a “huge pillar” of Indian cricket and also a great ambassador of the gentleman’s game. 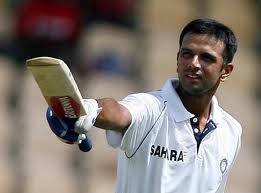 “As far his best knocks are concerned, there are bound to be debates. But as I had said always, the one at Eden Gardens is the best. Though I rate the knocks overseas highly, I think the knock at Eden with V.V.S. (Laxman) not only established him in world cricket but was also important for Indian cricket.

“I am happy that he could take the decision on his own. His contribution to Indian cricket isn’t finished with the number of runs he has scored or the catches he has taken, he is a great ambassador,” said Ganguly.

Ganguly also admitted that he was lucky to have Dravid as his vice-captain when he led the Indian team for five years.

“I was lucky to have you as vice-captain for five years. During my captaincy, you and John Wright did a lot of work behind the doors to build a strong Indian team. You are one of the best number three batsmen I have ever seen,” said Ganguly.

Dravid said that India’s ODI World Cup last year was a “special moment” for him.

“Mahi, you have to be proud of what you have done with this Indian team… it was a special moment for me to see the group of boys holding the World Cup last year after 2007 (when India were knocked out in the first round).

“It was a memorable moment. It was inspiring, as a 10-year-old, to see Kapil Dev lift the World Cup, and to do it again in 2011, was special. I know you have inspired a lot of 10-year-olds, there are challenges but you have the right temperament to take the legacy of Indian team forward.”

“It’s been a great partnership with you Rahul. When we look back we can gladly say we will only remember the wonderful memories. I just spoke about the 55 catches you have taken (off my bowling).

“When his first son Samit was born, somebody sms-ed saying caught Dravid bowled Kumble. But his son cannot be Rahul Dravid. It would be easier for his son to take 2 wickets than score the number of runs he has scored, just like it would be easier for my son to have a batting average of 18,” Kumble said.

“All of us know how he is as a person. During the evening-outs on tours he would know exactly what I hated. He was at times lost in his own thoughts, probably thinking about how he would bat the next day or analysing the day’s proceedings. I know in the next couple of months he would be busy with the IPL. I tell you its going to get busier.”

Laxman said he would miss Dravid and recalled the sacrifices he made for the team.

“It is a great occasion in the presence of the legends and the Indian greats of cricket to celebrate the end of the illustrious career of one of the all-time greats of the game. A great friend and a colleague.

“I will definitely be missing you in the dressing room. When I first met you as a 16-year-old, playing for Karnataka Under-19, I was impressed with your passion for the game and your style. We then went on to play for India and I cherish our relationship that blossomed over the years,” he said.

“In 1996, Rahul made his debut at Lord’s where he got out after scoring 95. He must have been really disappointed not to have got his century. But he proved how much effort, hard work and pride he puts into his game when he scored his century at Lord’s in 2011. Celebrations showed how much it meant for him to score it at the Lord’s for his country.”

“He has always been a very selfless cricketer. And that was proved by the various roles he has donned as a cricketer over the years. Right from opening the batting to keeping, he has always showed that for him team comes first. All the best to Rahul as he prepares to spend the time with his lovely family. I would also like to congratulate his family for the upbringing and the way he has been. Even after achieving so much he has always remained grounded,” he said.
IANS