Shimla: Having executed 126 MW Largi project as one of the most expensive hydropower projects in the state, HP State Electricity Board is way behind schedule in executing another 100 MW project (Uhl III) with cost overruns having already more than doubled its projected completion costs. 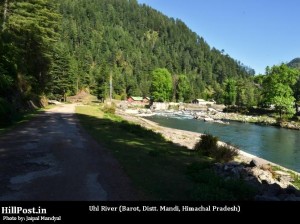 When started in September, 2002, the Uhl project was estimated to cost Rs 431.56 crore but by December 2011, the government has already spent Rs 699.38 crores and after having rescheduled commissioning dates more than once, the hydropower plant is expected to come on stream in May, 2013 at an estimated Rs 940.84 crores, power departments documents showed.

Initially the completion target was by the year 2005.

A retired HPSEB hydro-engineer not wanting to disclose his identity said, “the project was only taken up to please some political bosses and a cost-benefit ratio was never done.”

The medium sized project is technically a very difficult one to execute because the head race tunnel (HRT) is along a mountain ridge which does not provide alternate access points to excavate than the beginning and end points, he revealed.

Contractors working on this vital 9258 meters long tunnel have abandoned the job at hand on two occasions.

Sanan said, “the contract for construction of HRT was rescinded twice – once in April, 2008 and second time in July, 2010, because of slow progress and non performance.

This tunnel that will divert waters from Neri and Ranak streams in Jogindernagar region of Mandi district is anticipated to be only completed in February, 2013 and the first of the three generation units is targeted for commissioning by 31st March, 2013.

Commissioned in 2008, the 126 MW Largi project executed by HPSEB after serial delays and expensive cost overruns was finally billed at Rs 1461.33 crores