New Delhi : A few years back, a boat trip down the Chambal river in north India would have yielded a surreal sight – groups of gharials basking in the sun on the sandy stretches, their long, slender snouts wide open.Unfortunately, such a sight is rare in the Chambal today. Not only are the gharials (Gavialis Gangeticus), the slender-snouted crocodilian fighting for survival, their habitat is under greater threat than ever before.

Four years ago, a catastrophe of sorts befell the Chambal gharial. The river’s resident population began to suddenly die like flies, for unknown reasons. A total of 81 gharials died – a major loss for breeding individuals of an already endangered species.

But now conservationists are reporting an improvement in the gharial population of the Chambal. But they say unless a concerted effort is made by all quarters, the gharial is headed for extinction. 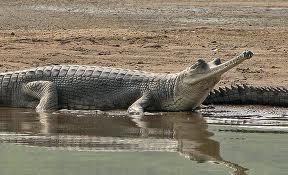 According to Colin Stevenson, Director, Madras Crocodile Bank, the reasons for the 2008 deaths were water pollution, combined with extraorinary cold weather that year, and scarcity of the fish species they eat.

“But the population is stable now,” Colin Stevenson said on phone.

Naresh Bedi, veteran wildlife cinematographer, remembers 2008 well. “The gharial tragedy of 2008 in Chambal was witnessed and recorded by us. It was a big setback for the gharial’s breeding population. I personally believe that paucity of their preferred fish also contributed to the catastrophe of 2008,” Bedi said .

So, what is the current number of gharials in the Chambal? “We don’t know precise numbers. Any total number will be a guess. We are planning surveys in Rajasthan and Madhya Pradesh, which will be hopefully carried out within the next year,” says Stevenson.

But the sword of Damocles continues to hang over the gharial. For starters, consider gharial numbers across India. “The gharial still remains critically endangered, with a plus minus figure of 200 breeding animals and a total population of well under 2,000,” says Bedi.

“The gharial species is teetering on the edge and could easily be wiped out with another catastrophe. Unless we take a very strong stand, there is little hope,” feels noted Bangalore-based herpetologist, Gerry Martin.

“The main threats to the gharial are sand mining, fishing, and water extraction/diversion,” says Stevenson. Sand mining is a major threat as they are deprived of their critical nesting and basking sites. Fishing nets placed on the river are a major danger as their long and narrow jaws get ensnared in fishing nets. “If trapped for long in the nets, the gharials drown; if caught, they are often maimed and left to die a slow death from starvation, or killed,” says Stevenson.

Dams have resulted in rivers like the Chambal becoming a trickle in some places – which are unable to sustain a gharial population, he explains.

Warns veteran herpetologist – an expert on reptiles – and Madras Crocodile Bank founder Romulus Whitaker: “The gharial’s main hope of survival is in the Chambal river, but the pressures on that river are enormous and increasing yearly. Fantasies like the scheme to interlink rivers pose a threat to all of our aquatic wildlife and fisheries.”

Conservationists feel that the government and the public should take corrective measures to manage the species.

“The authorities can bring illegal sand miners and fishermen to book. There should be a complete ban on sand mining in the protected river areas with gharial populations. River pollution needs to be kept under control,” says Bedi.

“Citizens should report and apply pressure to stop sand mining and illegal fishing in their areas,” says Stevenson.

The Gharial Conservation Alliance which Stevenson heads is also planning projects aimed at rescuing gharials from sand mining and fishing. “Sand mining is mafia-driven, often in cahoots with politicians. This makes our job difficult. In Rajasthan, we have identified specific areas of the river, from where sand mining will be completely banned,” says Stevenson.

He adds: “We are also running an awareness programme in Chambal villages which will educate fishermen that the gharial is their friend and not a competitor.”

He says that conserving the gharial is a test for India. “India should be proud of its gharial. This is a prime opportunity to show what can be done in this country when everyone gets together. The world is watching.”
IANS