India’s biggest challenge in the modern world is corruption followed by awful voting practices. Our voters are not smart, our educated youth is uninterested, and our Netas make the best of it.

Unlike most others who enjoy ridiculing the government, legislators and almost every else seen on Television, few students from IIT-Bombay decided to make things better. An online portal was their solution and it was christened as Netapedia. Within a short time span, Netapedia has emerged as a credible and extremely useful of source of information for millions of voters in India.

Find out what and how people at Netapedia intend to make Indians smart voters.

When did Netapedia come into existence? Getting off the ground is always difficult; did you face any difficulty?

Netapedia as an idea was conceptualized in November 2010 by Premjeet Kumar and Sidharth Mishra.

They felt that a site providing authentic information of our Netas in a user friendly manner should exist. As they did not find any such website they simply decided on building one.  Our team currently consists of 9 individuals, some are under-graduate students at IIT Bombay and few have graduated recently.

We slowly grew and were joined by others as the journey progressed. Gradually things started to move on the operations side. Collecting authentic and latest information was the biggest challenge. Eventually, as a result of combined efforts of the entire team, our site was launched in October 2011. In the last 5 months, we have received over 30,000 unique visitors. We are in the growing phase; suggestions feed the soul of Netapedia and we always want our audience to feed our soul with constructive feedback.

How do you think it is going to help the general public, keeping in mind that not many people use the internet in this country?

Firstly, it is a myth that not many people use Internet in India. Though the number of people is less, but this number is increasing at an exponential rate. Our target audience will increase manifold in the coming years. According to a recent publication by Internet and Mobile Association of India (IAMAI), the number has crossed 100 million for the first time in India. A major hurdle however, is that while most of the internet users or at least Netapedia’s visitors are students, there is a great indifference among the student community towards political issues. Hence, we are now focusing on reaching out to the non-student crowd on internet and also creating awareness and interest among the students over political issues. Our voters must act smart and know the inside out of their Netas, we will try our level best them to provide them the factual information in the right time. 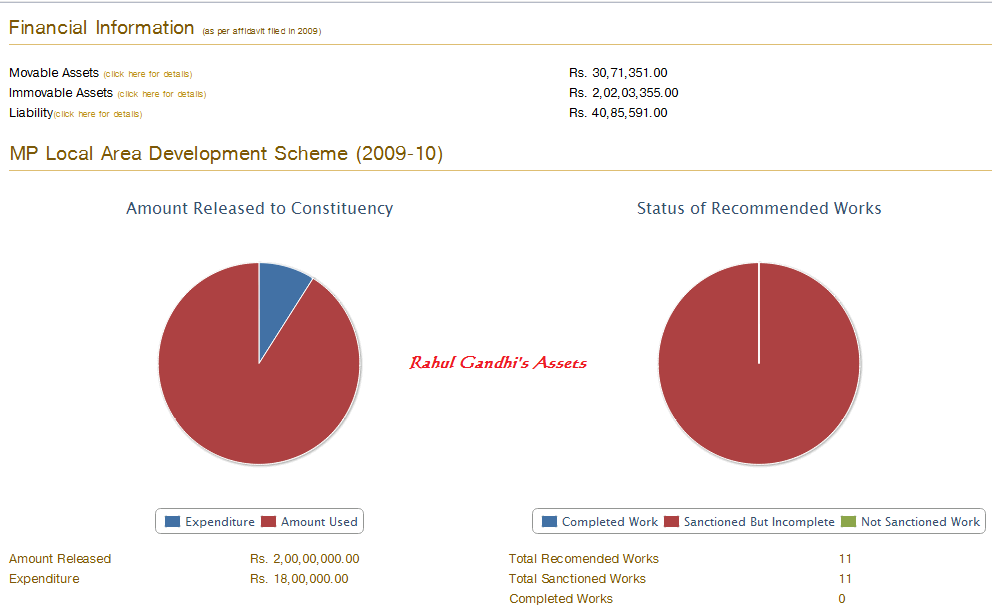 Coming to its utility, Netapedia in the long run, will serve as a single junction where you can stop for any information regarding any Neta. It will provide an easy reference to every essential detail and will also serve as a portal that can help individuals make informed decisions before casting a vote during elections. Just for an instance have a look at the snapshot from Rahul Gandhi’s page, supposedly the youth icon of Indian political system.

To increase the ease of using our site and also incorporating user-feedback, we are working on having a timeline for each Neta that will give an overview of his/her work at any point of time. We are also working on the “Compare Neta’s feature that will help easy comparison between two politicians which will serve the purpose of making easy decisions while casting vote. More features will be added to increase the utility of the site.

Contacting legislators and ministers has always been a tough job for ordinary citizens. Most of the times, listed emails bounce and phone numbers hardly work. Is Netapedia going to be an information-only source or you intend to focus on the ‘communication’ part as well?

We do not plan on providing any such email ids or contact numbers. However, we do hope that in the long run, Netapedia’s reach increases to an extent where it serves as a means of voicing dissatisfaction for the people as well as a means for gathering community-feedback for the politicians

What are your future plans with Netapedia? Expansion plans, if any?

Our vision is to be user friendly and provide authentic information to our voters. Right now, the general elections of 2014 are our aim. Our country is in a transition phase and these elections will largely decide the fate of our country, not for the next five years but for the next 50 years. Our votes make us good, bad, or ugly. We intend to paint a better picture of this country and we need smart voters for that. Vote intelligently and above all, please vote.