Shimla : The induction of Khimi Ram into the Himachal Pradesh cabinet may increase the difficulties of the P.K.Dhumal led BJP government that is already facing scathing attacks from the opposition Congress over “illegal” land deals.Already a breakaway group led by former BJP leader and ex-MP, Maheshwar Singh, has been levelling allegations of corruption against top functionaries, including Dhumal and his MP son Anurag Thakur. 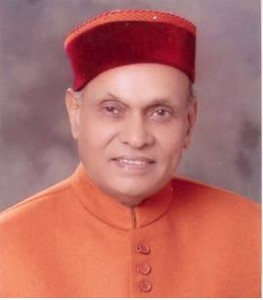 Political observers said the chief minister, after the expansion of the cabinet, is now finding himself face to face with ‘rebels’ within the party who are all set to train their guns at him ahead of the assembly elections due in December.

Dhumal Thursday expanded his council of ministers by inducting Ram as a cabinet minister. He was allocated the portfolios of forest and tribal development.

With the induction of Ram, a two-time legislator from Banjar in Kullu, the total number of ministers has risen to 12, including the chief minister, in the 68-member assembly. This is the second expansion of the cabinet since December 2007 when the BJP came to power.

A senior party functionary said the cabinet expansion would further stir up discontent in the party.

Bhardwaj was waiting for induction into the cabinet for over one year. His name was cleared at once by party national president Nitin Gadkari after consulting Dhumal and Shanta Kumar, a two-time chief minister.

Randhir Sharma and Khushi Ram Balnatah, a Shanta Kumar loyalist, were also in the race for the ministerial berth.

But inducting Ram into the ministry, political observers said, had become a necessity for Dhumal to counter the growing influence of breakaway leader Maheshwar Singh, who is heading the new political outfit, Himachal Lokhit Party. Both Ram and Maheshwar Singh are from Kullu district.

Shanta Kumar, who has already expressed his anguish with the party national leadership over the state’s affairs, also preferred to stay away from the ceremony to induct Ram.

“Many BJP leaders couldn’t participate in the ceremony as it was held at very short notice,” Dhumal said on being asked about a number of legislators not being present.

The rivalry between Ram, a close confidant of Dhumal, and Maheshwar Singh is not new. This was one of the reasons which made the latter float the Himachal Lokhit Party Feb 3.

Moreover, Dhumal has given a representation to Brahmins as there was no one from the community ever since J.P. Nadda resigned as forest minister in 2010 and joined the party national organisation.

The party national leadership deputed two central leaders – Nadda and Shyam Jaju, co-incharge of the state’s party affairs – this month to look into the reasons for bickering among the cadre.

The national leadership had rushed the central leaders after Shanta Kumar refused to intervene in the state’s affairs.

Interestingly, Shanta Kumar’s loyalists, comprising two ministers and three legislators, are also upset with Dhumal’s style of working. Political observers said they were not happy with the cabinet expansion.

Dhumal has a tough time ahead as he has to face an attack from two existing groups – one breakaway faction headed by Maheshwar Singh and the other within the party.

“It’s because of the autocratic style of working of Dhumal, we have said ‘jay siya Ram’ (goodbye) to the party. We are now free to expose the misdeeds of the government,” Singh said.
IANS