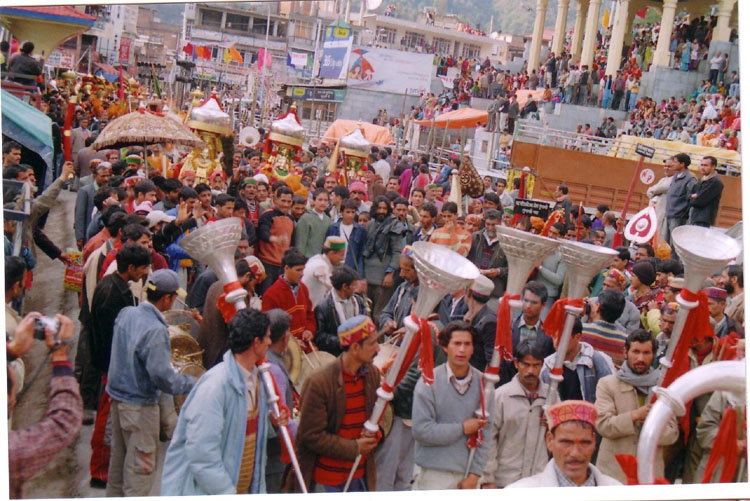 Mandi : The festival of Mahashivratri Monday is marked in a unique way in this Himachal Pradesh town, popularly known as Chhoti Kashi, as it sees a congregation of over 200 deities from hundreds of village temples.

The celebrations date back to 1526 when this town was founded during the rule of Ajbar Sen. He had ‘invited’ all the local deities to mark the founding of the new town.

Since then, the assembly of deities from hundreds of village temples during Mahashivratri has become a tradition.

After the rule of princely states came to an end, the district administration took over the task of inviting the gods and goddesses.

“More than 215 gods and goddesses have been invited to participate in Mahashivratri,” Deputy Commissioner Devesh Kumar, the chief organiser of the festival, said .

This year’s celebrations will be held from Feb 21 to 27. In fact the festivities begin in Mandi when they come to an end in the rest of the country where Mahashivratri was celebrated Monday.

The arrival of the deities in beautifully decorated palanquins amid sounds of trumpets and drums has begun. They will stay at the Paddal ground here till the fair concludes, said Kumar.

Like the week-long Kullu Dussehra festivities, Mandi’s Mahashivratri also sees a congregation of the divine and the temporal.

Mandi, located on the Chandigarh-Manali national highway, is dotted with more than 80 temples. The prominent ones among them are those of Bhutnath, Triloki Nath, Jagannath, Tarna Devi and Jalpa Devi.

The rulers of Mandi state were devotees of Lord Shiva.

He then constructed a temple there in 1526 — the Bhutnath temple, dedicated to Lord Shiva. Simultaneously, the foundation of Mandi town was also laid and he shifted his capital here.

During the first day of the fair, Lord Madho Rai, an incarnate of Lord Vishnu and the chief deity, leads the procession. The assembled deities follow him in beautifully decorated palanquins, as per protocol, and assemble at the Bhutnath temple.

Three such processions, locally called Jaleb, would be taken out on the opening, middle and concluding days of the fair, said an organiser.

Chief Minister PK Dhumal and Governor Urmila Singh will respectively participate on the first and last day of the festival.

Every year the festival attracts scores of tourists, especially foreigners and researchers.

The conduit between the mortals and the deities are the ‘gur’ – the traditional shamans of Himachal, who form the core of the communities’ spiritual sustenance. The ‘gur’ mediates between the people and the gods.

During the festival, transactions worth millions of rupees, cultural events and rural sports take place.
IANS