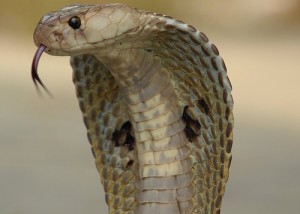 New Delhi : It wasn’t just heart-shaped chocolates and bright red roses that saw a spurt in sales this Valentine’s Day. A deadly drug prepared from cobra venom gave a new high at parties in the national capital and surrounding areas, anti-narcotics officials say.

“The sale of drugs (like K-72 and K-76) which have cobra venom is increasing at rave parties and in discos. These drugs enhance sensation and boost energy so that revellers can dance for longer hours,” a senior officer of the Narcotics Control Bureau (NCB) said on condition of anonymity.

“The sales increase a week before Valentine’s Day in Delhi and NCR (National Capital Region) and are consumed at hushed-up parties,” he added.

Delhi Police Monday night seized half-a-litre of venom, which was extracted from cobras, reptiles which are accorded the highly endangered tag under the Wildlife Act.

The raid, at Anand Vihar inter-state bus terminus in east Delhi, was conducted following a tip-off from the People for Animals (PFA), an animal welfare organisation.

Wildlife activists say that cobra venom, which is processed into a powder, is emerging as a favoured drug among adolescents and party-buffs.

He added that half-a-litre of venom costs a couple of crores of rupees in the international market.

To extract that amount of venom, the illegal traffickers would have killed as many as 100 cobras, which is a violation of the Prevention of Cruelty to Animals Act and the Indian Wildlife Act.

A pinch of the powder is used in cold drinks or alcohol. About 500 ml venom, processed into powder, can be used in 1,000 litres of alcohol.

“Due to their dwindling numbers, cobras, which were on Schedule IV in 2006, are now placed on Schedule I of the act, thus according them very high protection. But they are still being widely traded,” Gupta added.

According to bureau sleuths, apart from the deadly K-72 and K-76, drugs like cocaine, ephedrine, methylene di-oxy methamphetamine (MDMA) — commonly known as ecstasy — rohypnol and LSD, all of which are called party drugs, see a 5 to 10 percent spike in sales a week before Valentine’s Day.

“Youngsters prefer both party pills and alcohol mixed with K-72, as they can be consumed easily. After they drink, they get such a high that they don’t know where they are or what they are doing,” Gupta said.

When contacted Delhi Police said the drug scene in the capital is not as serious as in cities like Mumbai.

“Use of party drugs by youths in Delhi is much less than in Mumbai and other metros. We have not found any trend existing where youngsters are hooked on to the drugs made out of highly venomous cobra,” Additional Deputy Commissioner (Narcotics Cell) Sanjay Bhatia said .

As per NCB data, since January 2009, a total of 108 Nigerians have been arrested in Delhi on charges of drug trafficking.

“Major drugs seized include heroin, cocaine, MDMA and LSD. We are seeing an increasing trend in the sale of drugs made out of highly venomous cobra. We have increased our interdiction efforts against the traffickers by galvanising the intelligence network and mounting surveillance,” the NCB official added.