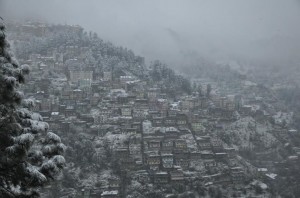 Electricity has still not been restored and people are confined to their homes . Hotels are finding it hard to keep their guests warm in the absence of electricity in Manali .

Shimla for the third day today was buffeted by strong icy winds . Despite severe cold in downtown Mall and the Ridge young couples were seen clad in heavy woollens , arm in arm celebrating Valentine’s day .

Manali remained cut off from the rest of the country for the fourth day due to heavy snow on the Kullu-Manali highway .

Travel agents and hotel owners said all bookings for the weekend and Valentine’s day in Manali have been cancelled due to the snow blocked road .

The sprawling high mountain tribal belt of Kinnaur , Lahaul , Spiti , Pangi and Dodra Kwar continued to reel under intense cold with a fresh bout of snowfall .

The entire region remains cut-off from the rest of the country since mid-December.