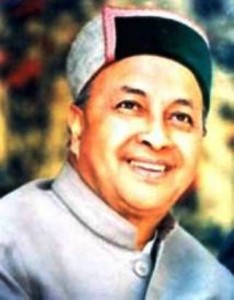 Shimla: Waiting with bated breath for a favourable poll results in neighbouring Punjab and Uttarakhand states, senior congress leader and union minister Virbhadra Singh held out that the day of redemption from the Prem Kumar Dhumal government was numbered.

Speaking to media persons here today, he said that the government of the day still had time to rectify the multiple acts of omission and commission done over the last four years as even erstwhile members of BJP who had floated a separate outfit were leveling serious charges of corruption and nepotism.

Scams are surfacing by the day and in time all will be investigated, he said.

Without naming any Team Anna member, he said the state government in contravention of land ceiling laws had permitted selling out of an entire tea estate to a leading Delhi based lawyer, who is part of Anna Team that has been playing into the BJP hands.

He alleged that there was a pulses scam worth Rs 50 crore, wherein imported consignments were sold at Mumbai. In place substandard pulses were repurchased at Delhi for distribution under the PDS system and transportation costs between Mumbai-Delhi were claimed the middlemen involved.

Nothing short of a CBI inquiry should be instituted into this scam for the people have lost faith in the state police, said Virbhadra.

Other issues pointed out included purchasing cement from suppliers on higher rate than one contracted for.

The minister also claimed to have received documents that hinted of a mega scam in purchase of medicine by the health department.

Virbhadra said that precious forest land had been handed out under the garb of eco-tourism and in contravention of Forest Conservation Acts.

Its nothing but a farce to distribute state largesse to favoured ones, especially as one businessman close to the party was allotted over half a dozen sites for eco-tourism, he said.

Despite making a hue and cry about the HP Apartment Act, he said more permission for colonizers was being given.

Rubbishing the government claim that more permissions for exemption under section 118 allowing non-state residents to buy land in the state were granted by the earlier congress government, Virbhadra said that despite the larger number of permissions granted for setting up industries under the industrial package for Himachal, land involved was much less than under the permission granted by the BJP government in the past four years.

Whats worse the government is trying to tinker with the state land laws itself to favour excesses of land purchases made by private universities and industrial houses, he added.

He said that the states financial position was so bad that the government was unable to meet its committed liabilities.

Employees are impatient to get their dues and the government is dilly dallying over it, he said.

Unsparing towards party colleagues in the state union minister Virbhadra Singh said that the opposition was being perceived by the people as not doing enough for a powerful enough opposition party in the state.