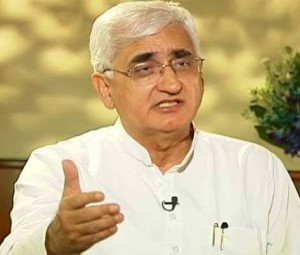 New Delhi : The Congress Sunday sought to distance itself from Law Minister Salman Khurshid after the poll panel complained to the president about his defiance on a quota for Muslims in Uttar Pradesh while the Bharatiya Janata Party (BJP) sought his sacking for indulging in communal politics.

A day after Chief Election Commissioner S.Y. Quraishi wrote to President Pratibha Patil saying the poll panel found Khurshid’s latest remarks “utterly contemptuous about the commission’s lawful direction to him”, a cautious Congress said it expected the law minister to follow law of the land.

“EC (Election Commission) is a constitutional body…Congress always wants that all the Congressmen should speak as per norms of public life and law of the land,” Congress general secretary Janardan Dwivedi told reporters here.

“Somebody gave a statement and there must be some thought behind it. EC has its own view and they are taking their action. I cannot comment more,” he said.

Seeking Khurshid’s removal from the cabinet, the BJP blamed the Congress for playing communal politics in desperation.

“PM should take action against Khurshid without losing any time and seek his resignation immediately,” BJP leader Sushma Swaraj told reporters in Varanasi.

“If Salman doesn’t quit, then he should be sacked. PM should ask the president to sack him,” she said.

Her colleague and party veteran Arun Jaitley charged the Congress with indulging in communal politics “for votes”.

“There is a method to this politics, divide the society on religion and get votes. It seems Congress leaders have lost mental balance and are doing things in desperation,” Jaitley told reporter in Lucknow.

Raising the controversy over author Salman Rushdie, Jaitley said the preventing him (Rushdie) “from coming to Jaipur or even addressing the literature festival on video link was clear indication of Congress succumbing before fundamentalists”.

The Communist Party of India-Marxist also said Khurshid should not have made the remarks.

“EC has slammed Khurshid and he should not have repeated it. He is a union minister but Congress leaders can do these things,” CPI-M general secretary Prakash Karat said in Allahabad.

Former solicitor general Harish Salve said that the poll panel’s decision is definitive on the violation of model code of conduct.

“The Election Commission has the last word in the violation of the model code,” Salve told news channel Times Now.

Salve said that if one constitutional authority defied another, there would be anarchy.

The poll panel had Thursday censured Khurshid over his promise for nine percent quota for minorities including backward Muslims from the 27 percent Other Backward Class quota if Congress is voted to power in Uttar Pradesh.

On Friday, Khurshid triggered a fresh controversy saying he will ensure rights to “pasmanda (backward Muslims)” even if he is “hanged” by the poll panel.
IANS