Shimla : On a day when Himachal Pradesh chief minister P.K.Dhumal inducted Khimi Ram into his cabinet there seems to be fresh trouble brewing for Dhumal as local legislator Suresh Bharadwaj is upset for not being made a minister . 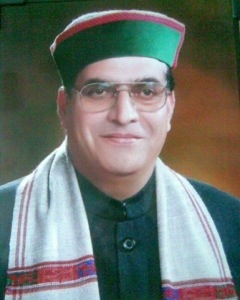 An ex MP , twice MLA from Shimla and also president of the BJP’s state unit once Bharadwaj was sure to get the ministerial berth this time as his name had been cleared by Nitin Gadkari and Dhumal only a few days ago , say sources .

But the recent rumblings within the BJP have upset his calculations . On the other hand a dented Dhumal by the split in the BJP as former BJP MP Maheshwar Singh left the party few weeks ago and launched the HLP .

To counter the growing influence of Maheshwar in the Kullu valley, Khimi Ram an MLA from Kullu’s Banjar has been lucky to get the ministerial berth.But will this move be enough to take on Maheshwar Singh who is a scion of the Kullu royal family , while Khimi Ram is seen as uncharismatic and a political light weight .

To add to Dhumal’s worries Randhir Sharma and Vipin Parmar reportedly turned down the offer to take over as chief parliamentary secretaries .

But in the process Shimla MLA Bharadwaj has lost out . Already nicknamed ‘minister in waiting for the last four years’ by gossiping regular Mall strollers here who bump into him every evening on the Mall .

After Narinder Bragta was made minister four years ago Bharadwaj did not lose hope , he stuck on to the chief minister . To show his loyalty he shadowed Dhumal at every public function and programme in the state capital .

But alas no rewards for him . It remains to be seen what he does now , will he continue to sulk and curse his luck or will be move towards the Shanta faction and take on Dhumal .

We will know in the next few months ahead of the scheduled assembly polls later this year .