Chandigarh : His marathons at the ripe old age of 100 may not have been recognised by Guinness World Records on technical grounds, but Punjab-born British citizen Fauja Singh says the only thing he cares about is to keep running.

In fact Fauja, who will turn 101 April 1 this year, says he has not even heard of Guinness.

“Mainu taan Guinness book da naam vi nahin pata, taan main uhdi fikar kyon karaan (I don’t even know the name of Guinness book, so why should I bother about it),” Fauja Singh asked during an interview here. 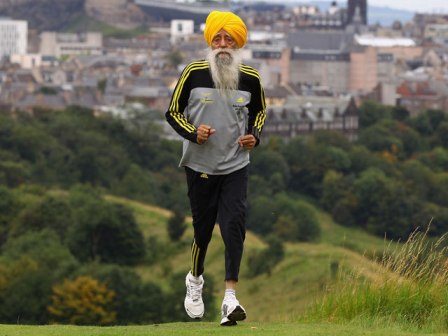 The marathoner is currently in India on a visit to his village Beas Pind, near Jalandhar, and other places in Punjab.

“My job is to run and I will continue to do that. Recognition by any book or agency will not affect my spirit towards running.

“For the record though, you can check my British passport that states my year of birth as 1911. Even the Queen (Elizabeth) sent me a congratulatory telegram April 1 last year (2011) on my completing 100 years,” the Punjabi-speaking Fauja Singh, who is illiterate, said.

Guinness had refused to recognise Fauja Singh as the world’s oldest marathoner in October last year after he successfully completed the Toronto Marathon (42.195 km) in just over eight hours. Though Guinness officials came to witness his feat in Toronto, they refused to acknowledge him as the oldest man running marathons as he could not produce a birth certificate.

“In 1911, when Fauja Singh was born in a Punjab village, there was nothing like birth certificates. I feel that rules of Guinness book and other agencies in western countries are quite biased towards achievers from Asian countries. Would they question the British government, which ruled India at that time (1911), why it didn’t have birth certificates at that time,” Khushwant asked.

An e-mail sent to Guinness authorities regarding Fauja Singh’s record did not elicit a response.

Guinness had recognized Dimitrion Yordanidis, 98, from Greece as the oldest marathon runner in 1976. However, there is little evidence to prove that Yordanidis, born in 1878 in Greece, had produced his birth certificate.

Fauja Singh moved to London in 1992. Before that, he used to go to there occasionally.

The death of his son Kuldip and earlier of his wife forced Fauja to search for a worthwhile alternative in life.

At 89 years, he took seriously to running and ended up in international marathon events in London, Glasgow and Toronto.

When he first turned up for training at Redbridge-Essex with coach Harmandar Singh, he was dressed in a three-piece suit. Fauja ran his first race, the London Marathon, in 2000. Before that, his early memory of being a runner was, at best, limited to participating in village sporting competitions before World War-II.

He was well-known in his village, where he was a simple farmer, for running “from one place to another”.

Fauja has also rubbed shoulders with the likes of football star David Beckham and other sport celebrities as brand ambassador and poster-boy of leading footwear company Adidas for their international campaign.

Billboards featuring him once used to be prominently displayed on busy London streets.
IANS 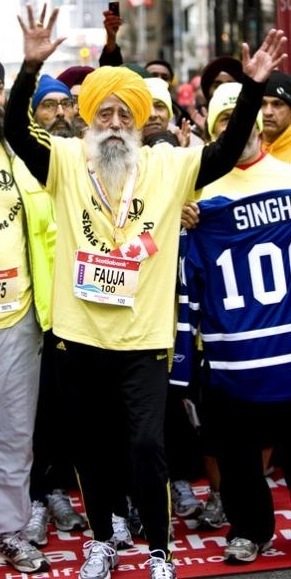