Dehradun : The 86 year old Congress leader, Narayan Dutt Tiwari, who is now perhaps better remembered for the paternity suit against him and his reported exploits in the Andhra Pradesh Raj Bhawan during his gubernatorial assignment, has yet thrown his hat once again in the Uttarakhand political arena by issuing a statement in TV channel that if asked to serve as chief minister, he was open to the assignment.

Admitting that age was getting the better of him, because of which he could not reach out to the required population during the current vidhan sabha elections, though he had held road shows and gone out in some constituencies in Kumaon and Garhwal divisions of this mountain state Tiwari said he wanted to contribute his bit yet once again in the development of the state.

The veteran Congressman who made the party high command concede to his demands of giving tickets to some of his handpicked supporters, including his nephew and former personal secretary by threatening to put up rebel candidates under the banner of a Vikas Morcha, claims that his participation in the electioneering indicates that he was yet fit to take on the chief ministerial assignment. 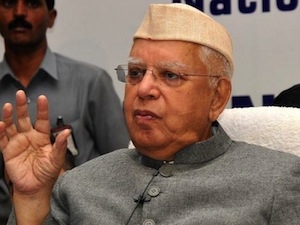 During this time he will be able to give a new direction to the process of development in the state,he claimed.

But the Congress high command in Delhi made it clear that it was in no mood to adjust the veteran leader in Uttarakhand yet once again. Party sources here said that the leader of the Congress legislature party in Uttarakhand would be chosen by the party MLAs from amongst those from the state who are within contention.

In fact Congress incharge of Uttarakhand, Chowdhary Birender Singh said that the name of who so ever is chosen by the party legislators as their leader, will be forwarded to the party high command and it would be Sonia Gandhi who would take the final decision.

But party sources were also of the view that as there are at least four front runners for the post of chief minister, Harish Rawat, Harak Singh Rawat, Yashpal Arya and Vijay Bahuguna, besides few more aspirants like Satpal Maharaj and Indira Hridesh could further queer the pitch. This, like it happened last time, could fortce the party high command to fall back upon N D Tewari yet once again.