Shimla : After two long and heavy spells of snowfall this month in Himachal Pradesh the weatherman has forecast more snow from Jan 22 , even as icy winds blew across the hill state Tuesday .

Despite claims by top ministers and officials of the state government that many of the main roads have been opened in the snow bound areas in Shimla district , in reality most of the district continues to be cut off from the rest of the state .

Most of the villages in Rohru , Jubbal, Kotkhai, Chopal among other places are without electricity for the past three days. 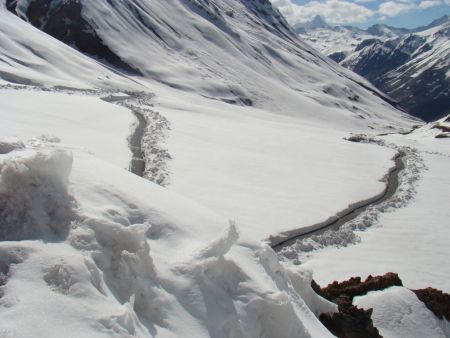 Sources in the over-staffed state electricity board say it could take several days before the snapped power cables are restored in Sungri and other areas .

Added to this is the shortage of cooking gas . LPG trucks have not been dispatched to these snow bound areas for over a fortnight now , complain many .

Even in the state capital Shimla one has to wait for a week to get a LPG cylinder as gas distribution companies say they are not able to meet the demand due to poor supply by oil companies .

Due to the freezing temperatures water supply has also been hit at most rural areas as pipes are frozen for the past ten days .

And the state run local IPH staff just like the electricity board staffers remain absconding at most places adding to the woes of the people .

People in the snow bound areas are critical of the chief minister P.K.Dhumal who has very conveniently moved to the lower areas of the state for his fortnight long winter sojourn .

When people are facing so many hardships due to heavy snowfall the chief minister should have at least remained in Shimla to take stock of the situation , say many .

People are particularly angry with the government for issuing false press releases to the print media and All India Radio saying all is well in the snow bound areas .