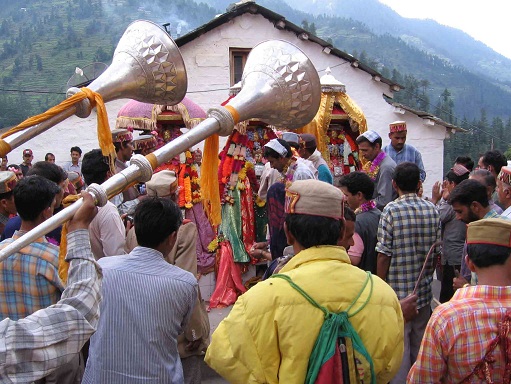 Manali:Â  Visitors to Goshal village and nine tiny hamlets located in its vicinity in Kullu district have been warned not to make a noise as the ‘gods’ are in deep meditation.

Every year, life in these villages – with a population not more than 10,000 – almost comes to a grinding halt for 42 days from Makar Sankranti. The residents stop listening to music, watching television and even tilling their lands.

“This is a very auspicious time when our chief deity is ‘in deep meditation’. We have no right to disturb him. If the god gets disturbed, it will bring ill luck,” said 63-year-old Tikkam Ram of Goshal village, four kilometres from Manali town.

The chief deity he is referring to is Sage Gautam. The other major deities worshiped in the area include Sage Vyasa and Kanchan Nag, a serpent deity.

“We have been following this unique practice of self-imposed restrictions for centuries,” he added.

As per tradition, the doors of Sage Gautam’s temple in Goshal are closed annually on Makar Sankranti – it fell Jan 14 this year – when Gautam Rishi along with Rishi Vyas and Kanchan Nag are believed to leave for their abodes for meditation. They return to the temple after a 42-day-long sojourn, the story goes.

The temple doors will be reopened Feb 26, the day the deities ‘return’, and people will start their routine activities.

Ved Ram, president of the temple committee, said the locals follow the legend religiously. “The villagers observe total silence during that period. Ceremonies like marriage are not solemnised. The locals even keep their mobile ringtones off.”

Even outsiders are not exempted from the injunctions. Visitors to Goshal village and the nine tiny hamlets are warned not to make any noise as the deities are in deep meditation. Any activity that creates noise would disturb them, believe the locals.

He said even iron implements are not used in agricultural fields and orchards. The entire area is otherwise known for growing delicious apples and maize.

Nirmal Devi, a resident of Panchal village, says: “The womenfolk normally sit together during this period at one place, stitch clothes and knit woolens for the next season. As these are noiseless activities, they are permitted.”

“It really offers a break from the routine like tilling and cutting wood and fodder,” she added.

Another local, Sheela Devi, says, “We will be back to routine chores only after our deities ‘return’ to the temple and make a forecast”.

According to legend, the temple is closed after spreading mud inside.

It’s a belief that when the temple is reopened and a flower surfaces on the spread mud, it symbolizes happiness for the villagers. If a charcoal appears, it indicates that the village is in store for some fire-related tragedy and in case of remains of grains, it indicates a good harvest.

The picturesque Kullu Valley is known for its local demigods and ancient shamanistic traditions that govern the lives of local residents.

Every village has several resident gods and goddesses which are invoked as living deities.

The conduit between the deities and their devotees are the “gur” – traditional shamans of Himachal who form the core of spiritual sustenance. The gur mediates between the people and the gods.