It could not have been a better start in 2012 for Shipra Khanna from Shimla who Sunday night walked away with the title of ‘MasterChef’ in the second season of the cooking reality show ‘MasterChef India’. 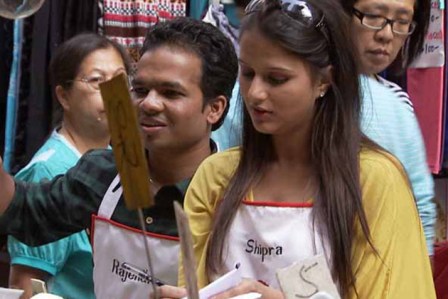 The 29-year-old single mother beat Joseph Rozario from Siliguri and Salma Shazia Fathima from Bengaluru to win the show that started off with 12 contestants.

The grand finale was telecast over Saturday and Sunday with actor Akshay Kumar once again returning to the show as a guest judge for both the episodes. Joseph Rozario was eliminated in Saturday’s episode.

Sunday’s final battle saw the last two finalists — Salma Shazia and Shipra — preparing dishes for 100 people, who through their votes declared the latter as the winner.

She won a cash prize of Rs.1 crore, a chance to host her own show on Star Plus and a vacation for three nights and four days in London.

The runners-up contestants were not disappointed either.

Salma Shazia was presented a cash prize of Rs.10 lakh, which she decided to share with ex-contestants Vijaylaxmi and Rajendra Narayan, while Joseph was given a job at the Radisson hotel.

The judges’ panel for the second season of the reality show included chef Kunal Kapoor and chef Ajay Chopra from the previous season, while Michlen star chef Vikas Khanna stepped into the shoes of Akshay Kumar as the third judge.