Dehradun : Anna Hazare being advised by doctors to rest for a month and not strain himself may have come as a setback to the BJP in Uttarakhand, but it has definitely left the Congress camp in high spirits, if not delighted.

Congress leaders here admitted that the biggest bottle neck in the party coming to power in Uttarakhand where elections to the vidhan sabha will be held on Jan 30, if any, was the impact that the tour of Anna Hazare asking the voters not to vote for Congress in the polls, would have on the electorate. 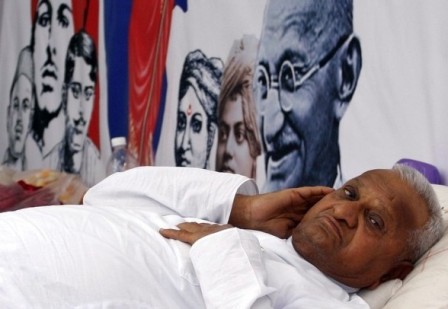 Initially the Congress party in the state was confident of coming to power with a clear majority at the hustings, but following the fast by the social activist in Delhi and the tremendous support all over the country to his tirade against corruption, had them thinking once again.

Later as Hazare declared that he would be touring the states where elections are due to be held and asking the voters not to vote for the Congress, there were fears in Congress circles here that it could have a disastrous impact on the party and may perhaps not come to power at all.

However, now the mood is upbeat. Congress leaders here feel that state and central BJP leaders may not even rake the issue of corruption, as there are many skeletons in the BJP cupboard, specially during the tenure of Ramesh Pokhriyal â€˜Nishankâ€™ as the chief minister.

In fact, the Congress has made no bones of claiming that Nishank was removed as chief minister of Uttarakhand just over a couple of months back and replaced with BC Khanduri because of the scams that had taken place and the image of the BJP was at an all time low.

The Congress is keeping its fingers crossed. So much hullabaloo on the Lokpal Bill and fingers being pointed at the Congress for diluting it to the extent of making it completely ineffective to deal with the rampant corruption in the country, may after all not impact the prospects of the party candidates in Uttarakhand.