Dehradun : Except for the star campaigners of both the Congress and the BJP who are flying in and out of the state; the din, cacophony, graffiti, posters and banners are missing: courtesy the hawkâ€™s eye approach adopted by the Election Commission authorities on the poll expenses of the candidates.

This coupled with the prevailing inclement weather and the accompanying chill has made it that much difficult for the candidates who are in the fray for the 70 vidhan sabha seats in Uttarakhand.

Elections for these will be held on Jan 30, hardly giving any time to the political parties to make inroads into the masses. 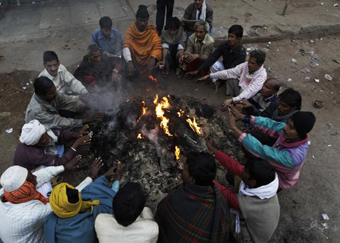 While the BJP is banking totally on the so-called â€œclean imageâ€ of chief minister Maj Gen (retd) B C Khanduri and made him the mask of the party for these elections, the Congress is banking upon the mass scale alleged corruption prevalent during the BJP tenure and promises of stopping the downslide of Uttarakhand.

How much will the public meetings of the party star campaigners sway the masses in favour of a particular political party, only time will tell, but with the little time remaining there is not much of canvassing that can be done at the grass root level, including door-to-door campaigning.

The reason for this is the chill in the mornings and evenings, which is making it rather difficult not only for the candidates and their supporters but also the electorate, who do not wish to be drawn out from the comfort and warmth of their quilts or heated rooms.

Though the temperatures improve, albeit slightly during the day, but it is not the time for door-to-door campaigning, The reason being that while in the urban areas, most of the people are in their offices are attending their businesses or shops, in the rural areas they are attending to their crops in the fields.

For the Congress the star campaigners include AICC chief Sonia Gandhi, her son and party general secretary Rahul Gandhi and ofcourse prime minister Manmohan Singh, who is in great demand in the Terai region of the state, which is the Sikh heartland, while for the BJP it is national president Gadkari, veteran party leader L K Advani, Sushma Swaraj and the youth face of the party, Varun Gandhi.

As for the voters, they are quite silent on which way they intend going and perhaps only the voting machines will reveal whom they have opted for. Even as both the BJP and Congress state leaders are keeping their fingers crossed and hoping for the best, the large number of rebels in the fray as independents, could play spoil sport for both.