Shimla : Moderate to heavy snowfall took place in Himachal Pradeshâ€™s resort towns of Shimla , Kufri , Narkanda , Chail , Manali , Dharamsala , Chamba and Dalhousie Saturday , even as freak snowfall fell in the lower hills of the state after over half a century. 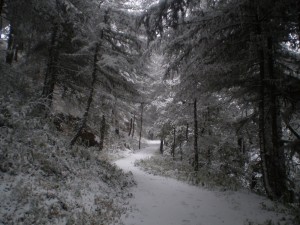 Residents of the temple towns of Chintpuri , Jwalaji and Kangra were shocked by the snowfall and sleet . The popular pilgrimage centre of Chintpurni saw snow after 1946 .

Nurpur had snow after 45 years . Shahpur and parts of Hamirpur among other places also experienced snowfall and sleet after many decades .

The snowfall was 2 to 6 inches in these places shocking locals .

â€œI saw snow in Chintpurni last as a 14 year old bride and am seeing it now after 76 years ,â€ said Savitri Devi , a 90 year old woman in Chintpurni .

â€œHeavy snowfall is expected along with blizzards and hailstorms in some places across Himachal Pradesh in the next 36 hours ,â€said Manmohan Singh , the head of the Indian Metrological Department here .

The tribal mountainous district of Kinnaur has recorded over 2 feet of snowfall cutting of the entire region from the rest of the country .

There are reports of snowfall at many places in Sirmaur district after many years with the 12,000 ft high Choordhar peak recording 5 feet of snow .

Chamba district bordering Jammu & Kashmir has been cut of from the rest of the country . In Pangi sub-division the authorities have warned locals to remain indoors and be wary of avalanches .

Normal life was affected in the state capital Shimla as the entire town wore a white mantle , delighting locals and tourists . The snowfall was moderate .

The maximum temperature was barely 1.6 C in Shimla Saturday some ten notches below normal .

Vehicles were stranded at many places in the higher parts of the town . People were forced to walk to their work places . Attendance was poor in government offices .

Many parts of Shimla district have experienced heavy snowfall with all roads blocked for vehicular traffic .

The Hindustan Tibet Road was closed for traffic for the second day with fresh snowfall in the ski resorts of Kufri and Narkanda .

The adjoining wooded resort of Chail was also under a blanket of snow . Manali a popular resort town in the Kullu valley had a heavy spell of snowfall .

The Dhauladhar ranges overlooking the Kangra valley and the adjoining Chamba valley experienced heavy snowfall after many years .

The snowfall was unusually heavy in Dharamsala . It also snowed lower down in Kangra town after many years .

Power failures have been reported at many areas in the state .