Shimla: For want of protective parapets on a busy road, a car skid off the road today morning fell onto another road, smashing the vehicle, injuring the driver and adding to the list of accidents that go unreported in the state and the inherent social costs involved.

When contacted DSP city Balbir Jaswal reported, â€œThe morning accident occurred when a car skid on a thin layer of frost and fell down onto another road. No case has been registered as the driver did not want to lodge any complaint.â€

However, a police team did go and investigate the accident site. Eyewitnesses claimed that the driver received first aid at a nearby hospital before leaving without undergoing a full examination of body injuries. 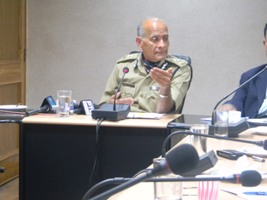 Giving the years count, Director General Police, Daljit Manhas two days ago said that in 2011 a total of 3075 accidents were reported across the state that had killed 712 people and left 3839 injured.

In the previous year, 779 people died in accidents and left 3719 injured, the police chief let the media know.

Citing a central road research institute report the police chief said that a yearly social cost of these accidents has been assessed by the institute at Rs 800 crore.

Preventing accidents that take a high human toll in the hill state is a priority for the police, he added.

While police on the record maintains that over 90% percent of the accidents occurring in the state are due to rash and negligent driving but on the side hold that bad roads are actually responsible for most of them.

Being part of the national highway that goes through the city, the today morning accident occurred at a place where the public works department (PWD) had abandoned setting up of low protective wall â€“ parapets in what is a hazardous traffic zone.

â€œThe PWD did start work on erecting the parapets but after sometime abandoned the work. This accident certainly could have been prevented, if the protective walls were there,â€ said Sanjay Chauhan, a resident of Pantaghati.