Shimla: Union cabinet committee on infrastructure at its meet today approved implementation four laning of the Kiratpur – Ner Chowk section of the national highway 21 that connects up Kullu-Manali on a build operate transfer (BOT) toll mode of delivery.

The total project cost is estimated to cost Rs 2356.20 crore of which Rs 537.37 crore would be spent on land acquisition, rehabilitation, resettlement and pre-construction, a Press Bureau of India communique stated. 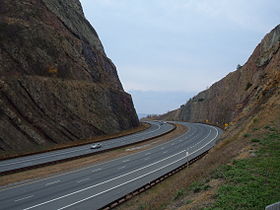 The main objective of the project is to expedite the improvement of infrastructure in Himachal Pradesh and also to reduce the time and cost of travel for traffic, particularly heavy traffic, plying between Kiratpur and Ner Chowk.

National Highway No 21 is an important link connecting national capital and tourist destination of Manali. The highway is also a major link to Leh in Ladakh.

The Kiratpur – Ner Chowk sub project under National Highway Development Project (NHDP) Phase III considered for four laning the 84.380 km long stretch on NH 21 in Himachal Pradesh under BOT (toll) mode is one of the approved stretches in place of some of the deleted projects of NHDP Phase III.

Cabinet committee on economic affairs in March 2005 approved 4000 Kms of four or six laning of national highways under NHDP (BOT basis) and subsequently approved additional stretches in October, 2006 and April 2007 of which four laning of Kiratpur- Ner Chowk section was one part.