Shimla: Having recorded on the best snowfall in many years, hill folks are in for freezing nights as temperatures dip below sub-zero levels and cloudy skies play hide and seek with sunshine, providing little relief for residents and tourists.

While tourists make the best out of a holiday in the hills, the administration struggles to bring about normalcy as most rural roads remain snowbound and bull-dossers, snow cutters and other heavy machinery has been pressed into service to open up landlocked valleys and areas. 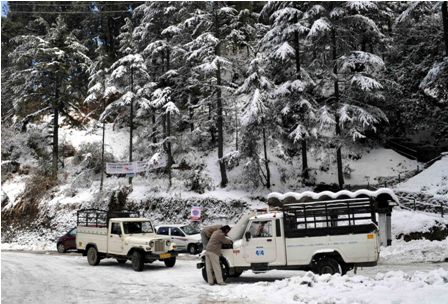 Vehicular traffic in the hill capital here remained disrupted as early morning ice prevented all movements. Most office goers struggled to reach office and were unable to punch their biometric attendance on time due to the difficulty in getting to office.

While on Wednesday, Shimla, Manali and Kalpa recorded more snowfall for the 6th consecutive day, it was partially sunny day here today providing some respite from the biting cold outdoors.

While Manali recorded 15 cms of snow, Shimla had a 8.4 cms fall and Kalpa in Kinnaur recorded 5.6 cms of snow. Between 10 to 15 cms of snow was recorded at the tourist resorts of Kufri, Narkanda, Chail and Mashobra.

The administration flew in emergency chopper flights from Bhuntar in Kullu to Lahaul, to bring in marooned people, patience or those wanting to reach home in Lahaul valley.

â€œForty people were rescued today from snowbound areas,â€ said Ajay Bhandari, a principal secretary looking after general administration. Three sorties between Bhunter, Stingeri and Udaipur in Lahaul were conducted in the afternoon, he added.

With heavy snow over Rohtang Pass, helicopter sorties are the only way to connect the high altitude valley for most of the winter months. 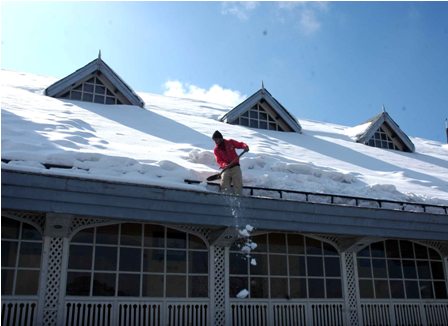 With a Western Disturbance in the upper air system still active over north western Himalayan region, the weatherman has forecast more snow next week.

Two people died by being buried in a house collapse and another dying in Chamba district of cold.
Keylong, the district headquarters of Lahaul recorded a sub-zero temperature of 10.4 degree Celsius virtually keeping all life indoors.

Kalpa in Kinnaur recorded minus 5.6 Celsius, Manali minus 2 degree Celsius, Shimla minus 1.8 degree Celsius and Solan also the temperature dipped below zero with a low recorded at minus 1.4 Celsius.

Gohar in Mandi, Seobagh and Bhuntar in Kullu, Karsog and Jogindernagar in Mandi were lashed by cold winds and rain.