Naldehra (Shimla): Teeing off on a bright Sunday morning at the second oldest golf course of the country provided the city golfers and those who had converged from the Chandigarh region, an alpine setting to compete at the first Times-Audi Golf Tournament here. 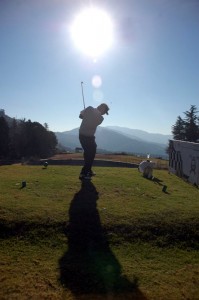 The tournament held in accordance with three categories of handicaps, it was local golfer Prithvi Sen came out winner with 23 points beating colonel Joshi by a point, who ended with 22 points in the best 0-9 handicap category.

In the 10-14 handicap category, bureaucrat JS Rana with 24 points got the better of ID Bhandari.

In the 15-18 category, it was Chandigarh golfer Vijay Sharma with 24 points who scored over local player Vikas Sood with 21 points to win the tournament.

A prize for longest drive was won by Arjun Sood and another one for closest to pin was secured by veteran golfer Brigadier (Retd.) Kanwar.

Giving away the prizes at the Chalets â€“ Naldehra, chief minister Prem Kumar Dhumal said that many foreigners come specially looking for an opportunity to play at the historic 9 hole course here.

â€œThe government was keen to develop golf courses in Manali, Dalhousie, Dharamshala and in the industrial belt of Baddi-Barotiwala-Nalagarh,â€ said the chief minister.

Besides the winners, the golfers from Shimla who competed at the game included Lt Gen Surinder Nath, who is General Officer Commanding ARTRAC, Yatish Sood, Ankush Das and those from Chandigarh-Panchkula were Sant Dhiman and Wing Cdr Bhushan and Satish Chakarvarty.

Other than the game, the golfers got a taste of high end Audi cars as the organizers had brought down 6 car and SUV models for display purposes but the players were also given to test drive the luxurious vehicles at the venue.

It was for the first time that a luxury car brand like Audi turned up at Shimla to host a Golf tournament at the historic course.

Nahdehra golf course has a legacy laid out by the imperial czar Lord Curzon in 1905, who was so found of the spot that he names one of his daughters after the place.