Jalandhar: To prove a point that dissertation of Jagbir Brar was not much of a setback, PPP president Manpreet Badal yesterday announced putting up a show of strength rally on Brar turf on 2nd January. 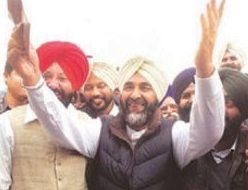 Shutting the doors on Brar, who also happens to be a cousin of Manpreet, he said, â€œPPP has no place for those who cannot honour an oath taken by holding the sacred soil of a martyrâ€™s land.â€

Taking umbrage on Congress poaching on PPP leaders, he said, â€œlack of credible leaders in Congress was forcing them to look for candidates elsewhere.â€

Manpreet denied allegation of favouring relatives saying that his brother in law and his wife held no party positions and their political activity were confined to Giddarbaha constituency only.

On the other hand Brar reacted angrily saying, â€œcanards about my rejoining PPP are being spread to confuse the voters.â€

If I could resign as an MLA without considering the consequences, my going back to PPP is out of question as I parted ways because of ideological reasonsâ€, said Brar.