Shimla : One set of people is quite delighted with the return of an intense cold wave in the picturesque tourist resort – ice skating enthusiasts who are hoping for some early sessions of the sport.

Overnight rains in and around Shimla Wednesday brought down the night temperature by 1.6 degrees from Tuesday’s 7.2 degrees Celsius, making the weather congenial for natural formation of ice in Asia’s oldest rink.

“Now the night temperature is quite low and humidity high. This will enable natural appearance of ice on the rink in the next few days,” Bhuvnesh Banga, secretary of the Simla Ice Skating Club, said. 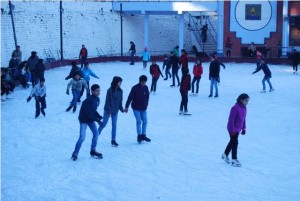 “There has been no skating session since Feb 4 with the abrupt rise in temperatures,” he said. The club authorities sprinkle water on the clay ground of the rink that freezes under natural conditions.

“We are really awaiting the onset of skating sessions. Now, we are free from school exams and ready to glide on the ice,” said Palvi Sood, a young skier.

It was Irish military official Blessington, a Shimla resident, who came up with the idea of setting up a natural ice skating rink in the town.

The idea struck him when once he inadvertently kept a bucket of water outside his residence during the peak of winter and found it completely frozen the next morning. He created a small one for his own use in 1920.

In 2010-11, the winter was quite chilly compared to the previous five or six years. The skating rink held 86 sessions during that year.

According to the meteorological office here, the town is likely to experience more rain till Dec 9.

“Once the sky is clear after Dec 9, the night temperature will fall sharply. At that time the weather would be more congenial for freezing the water. Moreover, the humidity level is quite high and that enables the water to freeze quickly,” Manmohan Singh, director of the meteorological office, said .

Tourists can enjoy skating by paying Rs.100 for a session. The fee includes provision of skates by the club.