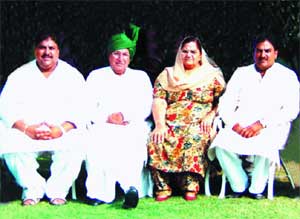 In its application CBI argued that trails of the three accused in three different courts would result in inordinate delays. While two cases are pending before two judges at the KarKardooma court complex the third one is under trail before a judge at the Rohini court compound.

In response to CBIâ€™s plea through special public prosecutor AK Dutta, district judge Sunita Gupta issued notices to Chautala, his two sons and other co-accused in the three cases and sought replies by 18th January.

In March, 2010, CBI had filed a charge sheet against OP Chautala accusing of possessing assets worth Rs 6.09 crore that exceeded his legal income for the 1993-2006 period which was calculated at Rs 3.22 Cr.

The investigating agency has put Ajay Chautalaâ€™s legal income for 1993-2006 period at Rs 8.17 Cr, well short of the Rs 27.7 Cr assets found with him. The agency slapped a disproportionate asset case.

In accordance with income tax returns filed, CBI before charging Abhay Chautala with disproportionate asset case put his income for 2000-05 at Rs 22.89 Cr which was 5 time less than the Rs 119.69 crore assets said to be with him.