Shimla: Imparting skill development among rural youth, the Darlaghat based Institute of Skill Development & Entrepreneurship is looking for expanding the institute and has approached the government for establishing a larger campus. 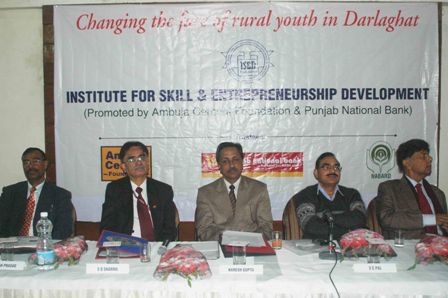 Speaking to the media, Umesh Prasad, who heads the institute said, â€œin three years 848 students have been trained of which 425 have found meaningful employment and another 297 have taken up self employed ventures.â€

â€œGiven by the response, we have approached the government for providing land for establishing a larger institute,â€ he said.

Set up by Ambuja Cement Foundation in collaboration with Punjab National Bank and NABARD, Rs 1.37 Cr has been spent of creating the institutesâ€™ infrastructure on land donated by Ambuja Cements.

Since the skill enhancement courses are provided on a token fee for a six month duration, the management has agreed to increase it to 9 months which qualifies as a full-fledged course, said Prasad.

VK Jain, a trustee of the foundation said that as there was large demand from the watch manufacturing industry for skilled manpower, the management had agreed to start a watch assembly and repair course at the institute.

General manager of PNB, SD Sharma on the occasion said that the bank as part of its corporate social responsibility was keen in setting up a farmers training institute. The government has been approached in identifying land, he added.