Mandi: Terming the cash for vote and the 2G scam as a national shame, senior BJP leader Lal Krishan Advani said that the years 2010 and 2011 would go down in Indian history as years of scandal, corruption and mis-governance. 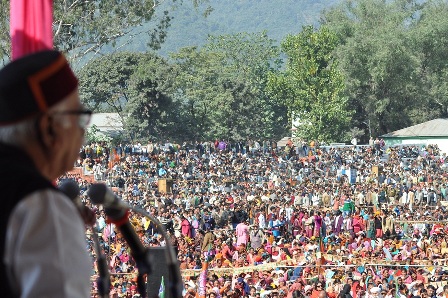 Starting out from Bihar on October 11, the veteran leader of many yatras, was addressing a large gathering at Mandi in his ongoing Jan Chetna Yatra here today.

Raking up the issue of tax evaded Indian money stashed in Swiss and other foreign banks, Advani said that BJP had demanded that it be returned to the country.

â€œIt will change the entire economy but the UPA government has no willpower to get this money back,â€ he said.

Good governance and corruption cannot go together for both were contradictory to each other, he added.

Recalling the Atal Bihari Vajpayee led NDA governments ambitious program of interlinking 130 rivers of the country, he said that it was estimated to cost about Rs 10 lakh crore and could easily be met out of the unaccounted money lying deposited in Swiss banks.

Remembering the various yatraâ€™s undertaken, he said that of the six yatraâ€™s he had embarked upon in his political career, the longest one was the Swaran Jayanti Yatra done in 1997.

The current one was scheduled to be a 40 day whirl tour of the nation and today marked the 36th day of the journey, he said.

Speaking on the occasion leader of opposition in Rajya Sabha Arun Jaitley said that the senior BJP leader had taken many â€˜Yatrasâ€™ to awaken the country.

Lambasting the Congress for protecting corruption, he said that public money was being doled to multinational companies.

He said that prices of essential commodities were sky rocketing, inflation had crossed into double digits and the common man was facing the brunt of mis-governance.

â€œThe rich-poor divide was widening by the day and many people had been pushed into starvation due to unbridled corruption,â€ he said.

Speaking about the measures taken to stem out corruption chief minister Prem Kumar Dhumal said that the state had enacted a law for attaching all property acquired through corrupt means.

A citizen charter had been introduced in Himachal, he said for ensuring time-bound delivery of public services.

To shield the people from spiraling prices of essential food items the government was provided subsidized rations to all sections of society by spending Rs 166 crore in this financial year, said Dhumal.