Chandigarh : Mangu Mithapuria, Jagjit Singh Jagga, Jatinder Bittu, Baljit Panjgarian, Sandeep Gurdaspuria and Maula Kandhala Jatta may not be Western sounding names, especially for people in Punjab. But they are ‘desi’ boys settled in other countries.

Mithapuria and Jagga are from Britain, Bittu comes from Australia, Panjgarian represents Germany, Gurdaspuria comes from Canada and Jatta is from the US.

Punjabi ‘desis’ or locals settled in other countries are the ‘star’ players tasting the scent of the soil of their motherland as they compete in the second edition of the World Cup Kabaddi, the brainchild of Punjab’s Deputy Chief Minister Sukhbir Singh Badal, who is also the state’s sports minister. 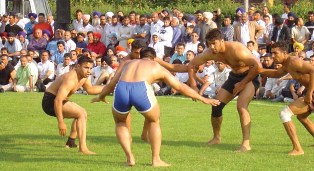 Like these, the majority players in the teams from 14 countries, including US, Britain, Norway, Germany, Italy, Australia and others are mostly Punjabi Indian youth settled in those countries.

“Most of the countries they officially represent have not even heard of kabaddi as a sport. The teams participating in the kabaddi world cup are not even recognized kabaddi club sides in those countries. They have just been brought here to put up a show,” a senior Punjab sports official, seeking anonymity, said.

For the record though, Badal wants the world to believe that teams from 14 countries are participating in the high-profile kabaddi world cup.

With assembly elections in Punjab likely in February-March next year, Badal has ensured a high-profile kabaddi tournament. Even the gala opening ceremony saw Bollywood superstar Shah Rukh Khan, who was reportedly paid Rs.5 crore for the appearance and specially flown into Bathinda last week, dance to the tune of his popular song ‘Chhamak Chhallo’ with well-known singer Sukhwinder Singh and professional male and female dancers.

The opening ceremony itself was almost on the lines of the Commonwealth Games last year in New Delhi with professional event managers being engaged by the Punjab government.

But not everyone is impressed by Badal’s credentials in spending several crores of rupees from the state exchequer for the kabaddi tournament.

While the winner takes a prize money of Rs.2 crore, the teams placed second and third will take Rs.1 crore and Rs.51 lakh respectively. The total prize money for the men and the women kabaddi world cup exceeds Rs.4 crore.

The expenses exclude the holding of the matches, security arrangements, preparing stadiums and the cost of creating a big hype of the event through advertisements.

“The teams participating in the tournament are not representing their countries and had not been recognised by their respective governments. This is only a show for Sukhbir’s personal survival where he has crossed all the limits of modesty for gathering crowds to satisfy his ego,” former chief minister and opposition leader Amarinder Singh said.

Amarinder said the Badals – Sukhbir and his father Chief Minister Parkash Singh Badal – had committed a “shameless act”, presiding over the opening ceremony, which had women dancing, in the name of kabaddi.

But some players in some of the participating teams are genuinely foreigners and not of Indian origin.

Mike Seattle in the US team, Yuri Myer and Leo Narado in the Argentina side, Sashantha in the Sri Lanka squad and some others are players who belong to the countries that they are representing.

The Pakistan side, which was the runners-up last year but got trounced by the US team 43-39 in a match in Gurdaspur last week, also has its own players.

For the first time, four teams – India, US, Britain and Turkmenistan – are participating in the women’s world cup kabaddi this time.

The kabaddi matches in the 20-day tournament are being played at nearly 15 different locations across Punjab, including rural areas. The finals and the closing ceremony of the event will be in the industrial city of Ludhiana.
IANS