New Delhi: A CBI court has convicted former telecom minister Sukhram in a corruption case that was registered 15 years ago.

Special Judge RP Pandey, convicted 84 year old Sukhram on charges of misusing his official position in awarding a lucrative contract to a private telecom firm for supplying cables to the government at inflated rates after receiving a bribe of Rs 3 lakh, 15 years ago.

The judge is likely to decided the quantum of punishment on Saturday. 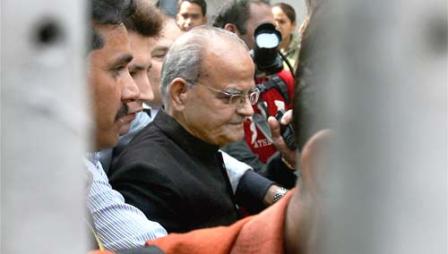 Sukhram, who is out on bail, has been convicted for the offences which entail a maximum punishment of seven years imprisonment.

The CBI, in its charge sheet filed in 1998, had accused Sukhram and Devinder Singh Choudhary for showing undue favour in supply of excess quantity of cable at inflated rates and causing a loss to the public exchequer. Choudhary died during the trial.

“Sukhram also obtained (illegal) gratification other than legal remunerations from Choudhary as a motive or reward for showing the favour to the said firm (HTL),” the judge said.

The court convicted Sukhram, brushing aside his defence counsel argument that had he caused a huge pecuniary gain to HTL, he would not have taken a paltry sum of Rs 3 Lakh. The court termed the argument as “devoid of merit.”

“It is a matter of common knowledge that it is virtually impossible to get any direct evidence where both i.e bribe giver and the person who takes the bribe, worked in joint concert,” ASJ Pandey said in his 188-page order.

In 2009, Sukhram was held guilty of possessing disproportionate assets worth Rs 4.25 crore.

In 2002, he was awarded a three-year jail term under the Prevention of Corruption Act in an equipment supply case for causing a loss of Rs 1.66 crore to the state exchequer.