New Delhi: Union Agriculture Minister Sharad Pawar was slapped in the face by a Delhi youth today who had only four days ago kicked former minister Sukh Ram after he was sentenced in a corruption case.

As his horrified aides watched and cameras whirred, Harvinder Singh attacked the minister who was walking with officials at the NDMC centre here. Pawar appeared to lose his balance momentarily but recovered fast.

Dressed in a blue striped T-shirt, the turbaned Sikh took out his kirpan before he was overpowered by guards.

“Sab chor hain… cheer doonga… cheer doonga (They’re all thieves. I will rip them apart), the man shouted as he was being whisked away.

The man who said he was a transporter from Rohini said the common person was fed up with rising prices of food items and corruption.

“Dikha diya maine… (I have shown it.) Today is Guru Tegh Bahadur martyrdom day,” Harvinder Singh said defiantly as he was hustled away and added that he was responsible for the assault on Sukh Ram too.

Harvinder Singh, who was detained at the Parliament Street police station, had Nov 19 attacked Sukh Ram at the Rohini courts complex after his sentencing in a 1996 telecom scam case. The octogenarian former minister was unhurt.

Thursday’s attack, amongst the few times that a minister has been attacked in public, seemed in a similar vein.

Though Pawar underplayed the incident, condemnation came in from all quarters, including from Prime Minister Manmohan Singh who phoned him soon after. 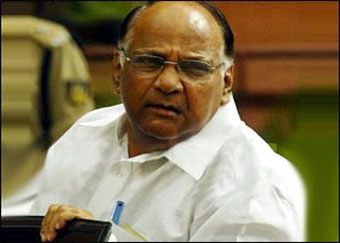 “Why should I react? I won’t call it breach of security because I don’t take security with me. I’ll see if this needs to be reviewed,” Pawar told a news channel.

His daughter and NCP MP Supriya Sule added in a similar conciliatory tone that everybody had the right to protest in a democracy but violence must be condemned.

“Let’s forget about it and move ahead,” she said, adding that her father was lucky to have escaped unhurt.

The issue also became the latest bone of contention between the Congress and the Bharatiya Janata Party (BJP), both of which condemned the attack.

To which Sinha retorted: “They can’t connect this incident to my statement. This is just politics.”

Anti-corruption crusader Anna Hazare, who has for long held politicians responsible for much of the ills of the country, first said when asked to react: “Was it only one slap?”

Once he realised the gravity of what had happened, he clarified: “He (the accused) could have been angry, but it is not right to hit someone. Our democracy does not allow such attacks.”