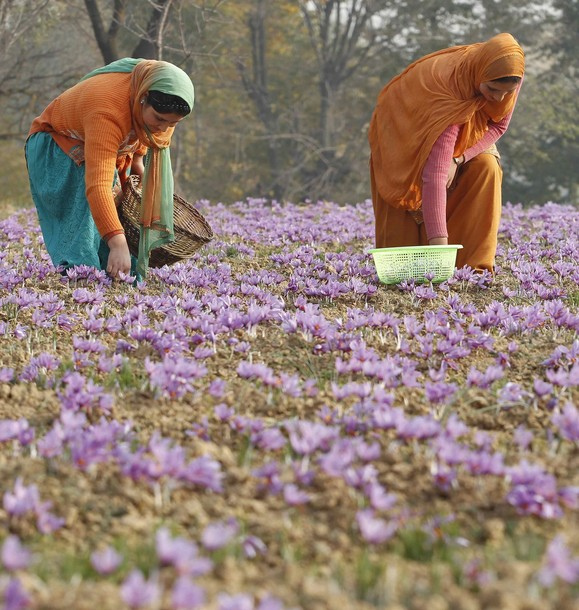 Pampore (Kashmir) : Saffron fields are aglow with their priceless purple blooms, bringing a whiff of a 500-year-old romance between a royal horseman and a wandering beauty that blossomed amid the hills of south Kashmir. But for saffron growers, regaining the state’s lost glory in saffron cultivation is no easy task.

For hundreds of families who depend for their sustenance on the saffron crop the profits have been short-lived.

Saffron is used as a colouring and seasoning agent. Some also use the spice for its aphrodisiac properties.

The world’s best quality saffron is grown in Spain and Kashmir. But during the last many years, saffron cultivation has suffered heavily in Kashmir.

“This happened because of crop diseases and adulteration of the product for higher gains by unscrupulous traders,” Mohiuddin, 54, a saffron grower here, said.

Others accused the government of neglecting this heritage crop of the Valley.

“The government only rose to the occasion after our future was destroyed. Now we are being trained and educated for using better agricultural technology to protect the crop and produce better harvests,” said Abdul Rashid, 45, another saffron grower.

When the purple blooms arrive in November-December, the bygone romance seems to come alive once more. A royal horseman – Kashmiri King Yusuf Shah Chak – and a wandering beauty – Zoon – met amid the saffron fields and fell in love at first sight in the 16th century.

Perhaps the early November moonlit night had wrought magic for the couple that has since become part of Valley’s folklore. Zoon, a local woman, later became the poetess queen under the name of Habba Khatoun.

As part of the NSM, Jammu and Kashmir Agricultural Minister Ghulam Hassan Mir distributed cheques worth Rs.9.5 crore among the saffron growers Wednesday.

“Ten grams of pure saffron costs Rs.1,000. But, unless quality control is strictly enforced, the historic faith of the buyers in Kashmir saffron cannot be restored,” said Ali Muhammad, who grows saffron in his fields in Gowharpora village in Pulwama district.

“We are providing all possible guidance and assistance to the growers. Our field staff inspects the saffron crop,” said an official of the agriculture department.

“Growers are being trained for better cultivation and crop maintenance and this year’s results have been encouraging.”

“We had a disease-free season this year after many years,” he said.

Abdul Majid Wani, general secretary of the Saffron Growers Association, told IANS that the production of saffron last year was 6,000 kg. “This year it is expected to be less than 5,500 kg.” According to Wani, around 9,300 acres of land is under saffron cultivation in the Valley.

Wani said under the NSM, latest technology is made available to growers, but so far it has been employed only on some land. “Once it is used on all the land, productivity is likely to go up.”

Since growers sell it individually, he was unable to give a figure to the total amount saffron sale fetched.

Although saffron cultivation needs both labour and skill, yet the romance and the folklore attached to this crop in Kashmir has created a poetic aura around the dazzling purple fields of Pampore that have survived for more than five centuries.
IANS