Cyrus is the younger son of construction tycoon Pallonji Mistry and belongs to a family which is one of the largest shareholder in the Tata Group. 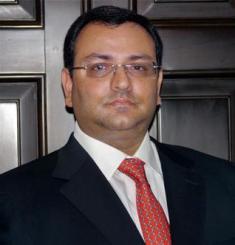 The 43-year-old Mistry scion was appointed deputy chairman of the board of directors of Tata Sons at its meeting Wednesday. He will work in this position for a year till Ratan Tata lays down the chairman’s office in December 2012.

“He will work with Ratan N. Tata over the next year and take over from him when Mr. Tata retires in December 2012. This is as per the unanimous recommendation of the selection committee,” said the group in its statement.

The group, which was over 100 companies in sectors as diverse as communications, IT, engineering, power, automobiles, cosmetics, air-conditioning and consumer durables, had set up a selection committee in 2010 to look for a successor to Ratan Tata.

Cyrus was the youngest member when in August 2006 he was appointed to the board of Tata Sons, the holding company of the group. He succeeded his father Pallonji Mistry, who retired after a year’s extension at age 76.

Ratan Tata, the chairman of the group since 1991, endorsed the appointment of Cyrus and called it a “good and far-sighted choice”.

“He has been on the board of Tata Sons since August 2006 and I have been impressed with the quality and calibre of his participation, his astute observations and his humility,” said the group’s chairman.

“He is intelligent and qualified to take on the responsibility being offered and I will be committed to working with him over the next year to give him the exposure, the involvement and the operating experience to equip him to undertake the full responsibility of the group on my retirement.”

Cyrus, currently managing director of the Shapoorji Pallonji Group, has been a director of Tata Sons since August 2006. He is a graduate of civil engineering from Imperial College, London, and has a master of science in management from the London Business School.

“We have had a 25-year-old relation with Shapoorji Pallonji family and I have dealt with him personally. I found him acute, very humble, humane and determined in his visions. I am thrilled for him,” said Deepak Parekh, HDFC chairman.

“It is a big job, it is a difficult job, it’s an organisation with complex set of industries, it’s not going to be easy,” the veteran banker added about Cyrus’s job profile at the helm of one of the country’s industrial giants.

Ratan Tata has been largely credited in making the Tata Group a global conglomerate with revenues for 2010-11 from its international operations at $48.3 billion, which constitutes 58 percent of its total revenues.

He was also at the forefront of big ticket acquisitions like that of Anglo-Dutch steel maker Corus and the legendary luxury auto brands Jaguar and Land Rover.
IANS