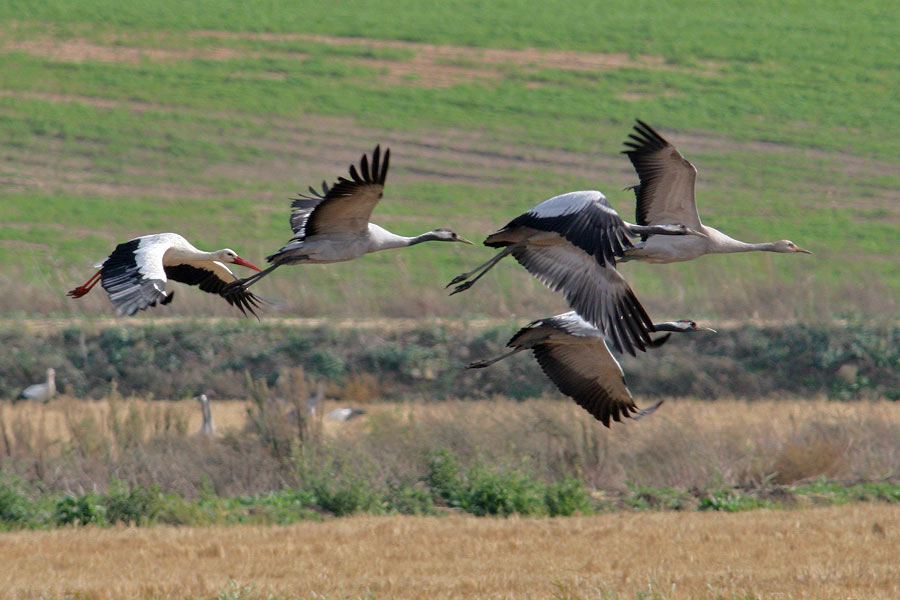 Lucknow : The wetlands of Uttar Pradesh are helping sarus cranes and black-necked storks thrive and agricultural practices in these areas have gone hand in hand with their conservation, says a yet-to-be-published study.

About 30 percent of sarus crane pairs are able to raise two chicks each year in the state’s Etawah and Mainpuri districts. This is pretty high for the cranes – higher than the sandhill crane in managed wetlands in the US, says the study.

Likewise, the black-necked stork usually raises one to three chicks per family, and four is a world record. Etawah and Mainpuri have several pairs of the stork with four chicks each, and one actually managed to raise five.

These findings by a biologist, whose study in the upper Gangetic flood-plains of Etawah and Mainpuri of Uttar Pradesh began in 1999, are set to be published in the prestigious journal Biological Conservation.

“The sarus crane, the tallest flying bird in the world, and the wetlands are closely interlinked. The bird does better in raising chicks than those that have a few or no wetlands,” K.S. Gopi Sundar, research associate (India) with US-based International Crane Foundation, said in an interview via e-mail.

The foundation is working worldwide to conserve cranes and the wetlands, grasslands, and other ecosystems upon which they depend.

He said the status of the sarus cranes appeared to be stable in Uttar Pradesh, but has declined hugely in Haryana and Gujarat owing to degradation of wetlands and marshy areas, the increased use of pesticides, changing crop patterns and stealing of eggs.

However, in Himachal Pradesh the sarus crane population is increasing.

“Overall, the trend does not seem positive. The black-necked stork populations seem to be declining precipitously. Uttar Pradesh appears to have the best populations of both the species. Given the very high human population, that is both a happy irony and a challenge for conservation,” he said.

Sundar, who is also principal coordinator with the Delhi-based Wildlife Protection Society of India, monitored 253 pairs of the sarus crane and 29 of the black-necked stork during the study.

“They proved to be rather good breeders even though they had a very small amount of protected wetlands to use. The observed sarus crane pairs raised 702 chicks – a huge number for a globally threatened species indicating how important Uttar Pradesh and the current farming style is for this species.

“Monitored black-necked stork pairs raised over 200 chicks – also substantial for a species that is thought to be a slow breeder and near-threatened,” he said.

Both species have the vast majority of their populations in agricultural areas. The farmers of Uttar Pradesh are doing very well to show that both farming and biodiversity conservation can go together if elements of the landscape like wetland patches are retained, says the study.

The study, the first-of-its-kind in India, compares the effects of climate change on the breeding success of birds and compares it with habitat loss.

On the factors affecting their breeding success, Sundar said “the pairs that have more wetlands in their territories do better at raising chicks”.

The sarus cranes nest on water, and when wetlands are very close to roads, they do poorly.

“The black-necked storks nest on trees. Also, the storks are carnivorous (as opposed to the omnivorous sarus) – and so they need good wetlands when the chicks are growing. So, good rainfall is a key requisite to both species.”

The biologist said at present there is a lot of planning for climate change adaptation, including a new $50-million project funded by USAID about to be implemented in India, in agricultural areas.

“Most of these planning processes ignore the biodiversity on agricultural landscapes, and tend to be biased towards increasing and strengthening crop production only.

Including wildlife in agricultural planning is very important and necessary if species like sarus cranes and black-necked storks are to be retained in good populations, he added.
IANS