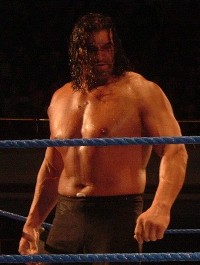 Shimla : US based WWE professional wrestler the Great Khali will be in India for a month and will celebrate Diwali at his native village in Sirmaur district of Himachal Pradesh , reports said .

Family members of Khali were quoted as saying that Khali will arrive in India on Thursday . He will be home for the first time for Diwali after joining professional wrestling more than ten years ago .

Khali will have a busy schedule during his month long stay in India , sources told the Hill Post .