Dehra Dun : Concerned at the melting of the ice Shiva lingam in the Amarnath cave, which is visited by lakhs of pilgrums annually during the Amarnath yatra, the Wadia Institute of Himalayan Geology here intends setting open an automatic weather station at the shrine to study the reasons. 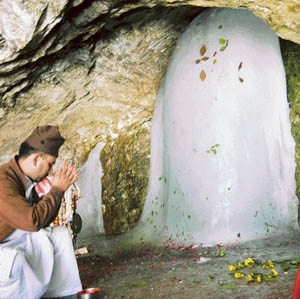 Director of the Institute, A K Gupta said that there was a debate amongst environmentalists whether the reason for the early melting of the Shiva lingam was due to global warming as broadly believed, or the presence of the large number of pilgrims that visit the cave every year to get a glimpse of what is popularly known as the â€˜barfani babaâ€™.

He said that in the absence of concrete and accurate data, it was not easy to analyse whether the cause of the early melting was global warming or human interference at various levels.

â€œThis can only be done after information on various factors like amount of rain, climatic conditions on day-to-day basis, snowfall in the region, temperature data and similar factors is analysedâ€, he added.

Gupta said that after the data was collected by the automatic weather station over a period of time, the information would be analysed by a team of scientists and a report would be made on the factors causing the early melting.

Once this was done remedial measures could be adopted to prevent the early melting of the ice shiva lingam, which would go a long way in preserving the faith of the pilgrims.

It may be mentioned here that the ice Shiva lingam that is formed in the Amarnath cave maintains its natural size and shape from May to August during which time the shrine is opened to pilgrims.

But over the past few years there have been reports that the Shiva lingam has melted and reduced in size, with the worst being in 2006, when it had melted away even before the first batch of yatris had reached the holy cave and an artificial ice Shiva lingam was made for the benefit of the pilgrims.