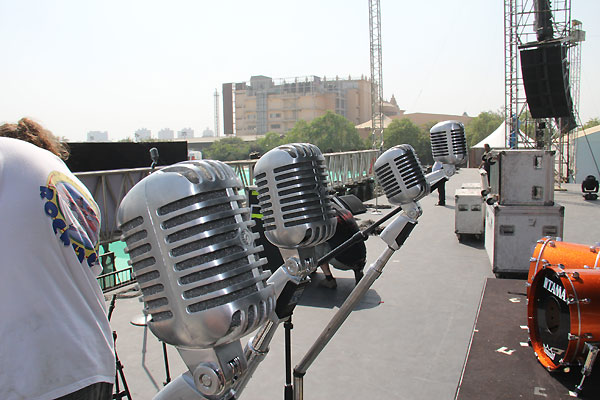 Gurgaon : Excited members of American heavy metal band Metallica were looking forward to a “loud and explosive” performance for their Indian fans, just minutes before their gig here Friday was postponed to Saturday.

The band’s members include lead guitarist Kirk Hammett (who joined the band in 1983), bassist Robert Trujillo, who sing and play alongside James Hetfield and Lars Ulrich. They landed here Friday.

“Our music is head banging, loud and explosive that is exactly we are planning to do. That is exactly what we want to give to our fans here,” Hetfield told reporters here at a press conference, before the announcement of the gig’s postponement was made.

The performance was shifted to Saturday following “technical faults”, and ensued chaos at the venue thanks to angry fans, who shelled out money between Rs.1,650 to Rs.2,750 for the event.

The band members were surprised that over 20,000 fans had gathered at the venue, the Leisure Valley Ground here, to watch their performance. Fans were looking forward to hear their popular songs like “Nothing else matters”, “Fade to black” and “Seek and destroy” among others.

“We are thankful to the people here who have popularised our songs, our beliefs. Want to thank them for playing our music on our behalf. I hope our energy

inspired people to create their own music,” added Hetfield`.

The singer-cum-guitarist says it would be no wonder if India and its people influence their future music.

“Nothing happens unnoticed, unobserved. It is quite possible we take back notes of a few things from here which could be an influence, a reflection of India which could be used in our future works,” he said.

The band is known for albums like 1986 release “Master of Puppets”, 1991 album “Metallica”, which reportedly sold over 15 million copies in the US and 22 million copies worldwide and their last release “Death Magnetic”.

Metallica’s members feel Indian talent has crossed borders and made a mark overtime.

“We create very rooted music which is also the flavour of India. Some of the best musicians that we know of are from India. I attended a concert of Zakir Hussain sometime back, he is amazingâ€¦,” said Hammett.

Among other flavours of the country that the band members wish to taste, is Goa’s special vindaloo curry.

The band is due to perform in Bangalore Sunday.
IANS