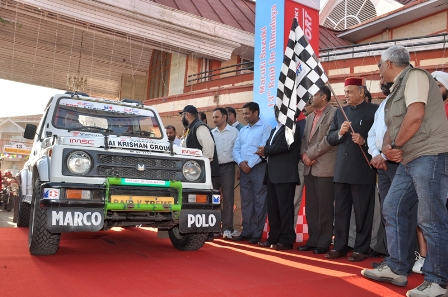 Shimla: Growing in size each year, organizers of Raid de Himalaya have chalked out a a different route for amateurs this year while the professionals go down the beaten route, crossing the highest motorable mountain passes on the planet.

With a ceremonial flag off on Monday, Manjeev Bhalla, spokesman for Himalayan Motorsport Club said, â€œthere would be about 162 rallyists starting out on Tuesday, making it the largest participation that we have ever had at the Raid.â€

With last minute entries coming in, there were 82 competitors in the four wheeler vehicles category who logged in for the adventure trail section and for the more arduous one named X-treme category there are 36 riders on motorcycles, including a strong contingent of 6 riders from Team Austria and 44 team in four wheel vehicles category who would battle it out for the trophy, he said.

In the four wheel category 5 time winner at the Raid, Suresh Rana from Team Thunderbolt, last years winner Major Arminder Brar and well known driver Sunny Sidhu from Chandigarh would be racing against each other yet again.

In the motorcycle category, Rajeev Khanna, a veteran of Himalayan Rally fame, has entered as a participant for the second year in a row.

With a track record of only 25 percent starting finishing the race in the X-treme category would take old the route out from Shimla, crossover Satluj River at Luhri, climb over Jalori Pass into Kullu valley before heading into the high altitude wilderness over Rohtang Pass, going past Darcha, Patseo, Sarchu, Pang, Leh, crossing over Khardung La, Kargil, passing by Parkachik, Rangdum, Dras to finish at Srinagar after 6 rough days out racing at an average altitude of over 10,000 feet.

The adventure trail would take a new route from Manali and heading through Mandi, Kangra, Dalhousie, crossing over Chatergala and Sinthan Passes in Chamba to Kathua, Doda, Kishtwar, Anantnag, Pulwana, Rangdum, Zanskar valley, Pandum and will also finish at Srinagar in 6 days.

The prize distribution is to be held on 17 October at Srinagar, said the organizers.