Manali:: Actors Ritesh Deshmukh and Genelia Dâ€™Souza are every bit loving shooting of the Bollywood tale â€˜Tere Naal Love Ho Gayaâ€™ in the serene and green valleys of Manali. 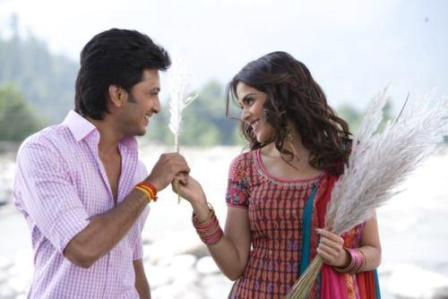 On Thursday and Friday, the on screen couple had a busy schedule shooting the love song â€œmain wari java, saan tho ki hoya ve kasoorâ€ in valleys of Kothi near Manali.

Other than the on screen romance, the two have also been spotted stealing quiet moments together.

Catching up on latest mega releases, the duo were spotted at Piccadilly theater, Manali watching the Salman Khan starrer â€˜Bodyguardâ€™. In the evening the two were sighted having a quiet dinner at Johnson CafÃ©.

While Ritesh has been taking time out to drive around Manali and Genelia is happy to be back in the valley after a gap of 10 years.

The rising actress was in Manali to shoot for Hero Ranger Cycle in 2001 which happened to be one of her first commercials.