Felicitated here for having been selected for the prestigious Rajiv Gandhi Manav Seva Award, Mallika Nadda said that there were 5 special children from Himachal who had secured 5 gold, 2 silvers and 3 silvers at the Special Olympics at Athens.

â€œSpecial Olympics provide a global stage for physically challenged children to showcase their talent that helps to earn mutual respect without bias of prejudice,â€ she said.

In all there are 18 Special Olympic medal winners from Himachal, consisting of winners at winter and summer games, she added.

Nadda said that their organization has been asking the state government to provide employment opportunities for them as the 3% reservation quota for sportsperson did not include special Olympic winners. 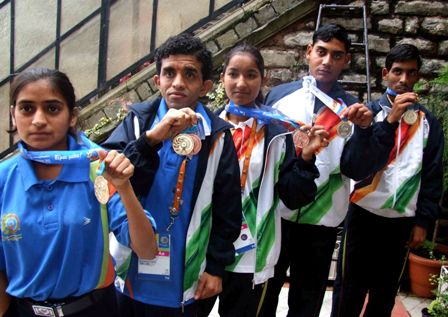 Announcing plans for preparing special children for special Olympic world winter games to be held in Seoul Korea in 2013, she said that a national coaching camp would be held at Shimla and Narkanda in December 11 and February 2012.

On the occasion the chair persons also announced the selection of 35 probable athletes for the coaching camps.

Earlier the Shimla chapter of Special Olympics Bharat, honoured the 5 medal winners of the Athens games and the Mallika Nadda for her contribution in spearheading the cause and getting it national attention.