Shimla : Satluj Jal Vidyut Nigam Ltd(SJVNL) has declared a total dividend of Rs 333.93 crore for its financial performance in the last fiscal year.

Towards Himachal Pradeshâ€™s 25.5 per cent participation in SJVNLâ€™s equity, the state government on Tuesday paid a cheque of Rs 84.40 crore and the rest of the government of India. 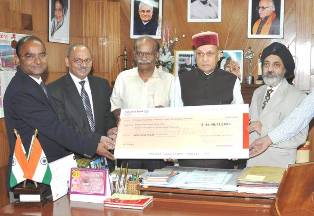 The companyâ€™s CMD R.P.Singh presented the cheque to the state chief minister P.K.Dhumal.

Since April to August the plant has generated 4865 MU of electricity. Singh said this year in August the Nathpa project generated 1151 MU, which was an all time record.

SJVNL is a joint venture company owned by the Centre and the Himachal government.