Shimla:Thousands of devotees thronged prominent temples in Himachal Pradesh to mark the onset of the nine-day long Navratra festival, the holy period of Hindus. 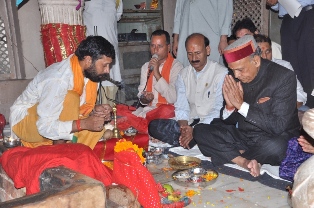 Among the many, chief minister Prem Kumar Dhumal on Wednesday too paid obeisance at the famed Brajeshwari Mata Temple in Kangra.

“Special arrangements have been made for the devotees. More than 50,000 people are expected to pay obeisance at the Naina Devi shrine every day,” said Bilaspur Deputy Commissioner Ritesh Chauhan.

Security was beefed up and Closed Circuit Television (CCTV) cameras were installed to monitor the crowd, he said.

The hilltop Naina Devi temple in Bilaspur district is one of the prominent temples in northern India.

The hill state, also known as ‘land of gods’, has 28 prominent temples, most of which are in Kangra, Una and Bilaspur districts.

The ban on offering coconuts as a precaution against a terrorist attack, would remain effective in all the temples, a senior police officer said.