Kullu: Barring two deities, whose devotees have been at war, over 250 gods and goddesses have a special ‘invitation’ next week – to grace the centuries-old Kullu Dussehra festival in Himachal Pradesh.

The two deities – Shringa Rishi and Balu Nag – have been excluded again this year from the august list of gods and goddesses due to their feuding devotees who wanted a special place of honour for their respective god in the annual procession.

The one-upmanship among the followers of the two deities has left the festival organisers worried. And to avoid any clash, the district administration has decided to hold back their invites. 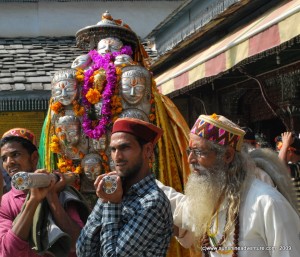 More than 250 gods and goddesses have been invited to join the festival processions and their devotees will start assembling in this town next week to participate in the week-long celebrations beginning Oct 6, the day the Dussehra festival comes to an end in other northern states.

“Like last year, this year again we are expecting the participation of around 220 gods and goddesses in the festival that will end Oct 12,” Deputy Commissioner B.M. Nanta, a member of the Kullu Dussehra Committee, said .

The administration has been inviting the deities ever since the rule of princely states came to an end.

Nanta said the administration would invite Shringa Rishi and Balu Nag deities only when their devotees settle their decades-old dispute.

The origin of the rivalry dates back to the early 1970s over the position the two deities should occupy in the festival processions.

According to tradition, the idol of the superior deity is carried on the right side of the chariot of Lord Raghunath (Lord Ram), the chief deity, during the procession taken out on the first and the last day of the festival.

For many decades, Shringa Rishi, who was Lord Ram’s guru, used to occupy that place.

“After 1971, followers of Shringa Rishi boycotted the ceremony for 11 years over a dispute. Balu Nag, who is considered the incarnation of Lord Ram’s brother Lakshman, then took that spot,” said state Language, Art and Culture Director Prem Sharma.

“When the conflict among their followers grew stronger, both stopped participating in the festival,” he added.

“After a gap of 18 years, they again started participating. Tempers often rise among the followers during the ceremonies over the place of honour for their deities. From 2008, the administration stopped inviting them to prevent clashes but now they are coming without an invite,” Sharma said.

Local legislator Gobind Thakur, who is a member of the organising committee, said the followers of Shringa Rishi moved the state high court this year to retain their deity’s “place of honour”. The case is still pending in court.

The Kullu Dussehra dates back to 1637 when Raja Jagat Singh was the ruler of the Kullu Valley. He invited all the local deities to participate in the festival. Since then, the assembly of deities from hundreds of villages across Kullu district has become a tradition.

Unlike other places, effigies of Ravan, Meghnad and Kumbhakaran are not burnt here.

The Kullu Valley is also popularly known as the “Devbhoomi – the land of gods”.

Every village has several resident “gods” and “goddesses” – who are invoked as living deities.